Patrick Hough was the only Lewes Wanderer to take part in the South East Region Cyclo Cross Championships at Gravesend Cyclopark on the the afternoon of Sunday 2nd December.  The day was dry and bright, but the course was slick and muddy from rain in the preceding days and particularly tricky on the off-camber banks that were a feature of the circuit.

In the race for men under 40 Patrick made his now customary blistering start to lie 7th at the end of the first lap.  He improved to 6th on the third of the 8 laps and spent the next four circuits trading places with Toby Perry of Thanet RC.  He finally got the better of him to go 5th on lap 7 and just held off the recovering James Flury (Richardsons-Trek) who survived a heart stopping moment in the sprint for the first corner when his rear wheel jammed and brought him to an abrupt halt and two following riders down.

The East Sussex Cycling Association released their final season results and standings with riders from Lewes Wanderers featuring strongly.  Once again Lisa Davis triumphed in the Lady and Veteran Lady Best All Rounder with an average speed for ESCA time-trials over 10, 25 and 50 miles of 24.164mph.  Clare Parkholm was third with 22.034mph and Sue Collett fourth with 21.266 mph.

Lisa’s husband Brett Davis also performed well.  In 5th place he was the highest placed of the 27 Wanderers to appear in the standings for the Points Competition based upon finishing positions in the nine ESCA events during the season.  Lewes were second in the team competition based upon the points accrued by Brett, 10th placed Aidan McConville and 11th placed Nick Dwyer. 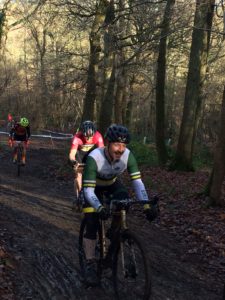 Round 9 of the Kinesis UK London and South East Cyclo Cross League was promoted by Sutton CC and held on Sunday 9th December.  The scudding showers had blown over leaving a bright and sunny afternoon for the races involving Lewes Wanderers, but the hilly wooded course laid out in the grounds of Frylands Wood Scout Camp, Croydon was a morass of sticky mud in many places.

So much so that on just the second lap of the race for men in their forties Paget Cohen’s rear derailleur was so clogged with mud that when he went to power up a hill the mechanism snapped; thereby prematurely ending his race.  He was one of eight among the 52 starters to suffer similar fates.

Club-mate Darren Haynes kept plugging away to complete four laps and finish a lap down on the winner.  Impressively he still had the strength left to muster a sprint finish, just losing out on 27th and what would have equalled hs best ever result by a bike length.

In the following race for men over 50 Dom Lowden and his bike both survived to meet the chequered flag after three laps, a lap down on the victor, but in a strong 26th place from the 43 starters, with eight non-finishers.