Club Secretary John Mankelow was the only Lewes Wanderer to compete in the opening round of Eastbourne Rovers’ evening time trial series on the sweltering evening of Thursday 19th April.  Following the installation of a pedestrian crossing serving a new housing development on the A259 in Little Common the Rovers have been forced to move their 10 mile time trials this season to the A22 course from East Hoathly to the Boship Roundabout and back also used by Lewes Wanderers.  Familiarity with the terrain played in John’s favour as he posted a highly commendable time of 25 minutes and 29 seconds to finish 16th of the 21 starters.

Early on the morning of Saturday 21st April, as is necessary with the amount of traffic on the roads these days, Lewes Wanderers’ Nick Dwyer crossed the border into Kent to enter the Catford CC 10.  This event starts high on the hill overlooking Tonbridge before plunging down the slip-road onto the A21 heading north to the first roundabout just before Sevenoaks then back on the southbound carriageway to just short of the slope where it began.  Nick took full advantage of the warm dry conditions and the downhill start to post a blistering time of 20 minutes and 39 seconds to finish in a strong 10th place out of 51.

Back in East Sussex, on the outskirts of East Hoathly to be more precise, an impressive 17 Wanderers among a field of 59, including 4 of the 7 female entrants, lined up the for the East Sussex Cycling Association 10 down the same out-and-back-course used only two days previously by Eastbourne Rovers.  It would have been 18, but Club Chairman and veteran of some 200 time-trials Dominic Lowden inexplicably got his start time wrong and arrived at the line 3 minutes late and with little prospect of a good result even if he had been allowed to start. 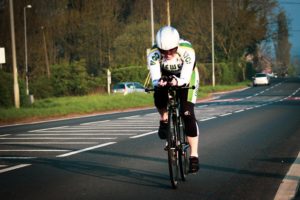 He wasn’t the only one to have a drama before the start as Kathryn ‘Mugs’ Gohl in her first ever time-trial was late arriving at the start line and immediately incurred a 20 second deficit.  In the circumstances her time of 26 minutes and 27 seconds (including penalty) for 48th overall and 5th fastest female was highly encouraging. Not nearly as encouraging as second rider off Sue Collett who took a whole minute off her personal best; her time of 27:32 placing her 52nd and 6th fastest female.  Between them Clare Parkholm recorded 26:43, while Lisa Davis was disappointed with her time of 24:39 despite it granting her 36th overall and a prize for second fastest female.

Two other Wanderers also made highly respectables debuts with Paul Fletcher (24:54 and 38th) beating 25 minutes at his first attempt and Richard Burchett not far behind in 25:22 and 41st place.  At the head of proceedings kudos for quickest Wanderer on the day went to 8th placed Rob Rollings thanks to his scorching 21:29, 21 seconds and 3 places ahead of Brett Davis; although everyone had to doff their cap to James Rix of Team Bottrill/Vanguard who won the event in a new course record of an incredible 19 minutes and 13 seconds.

Sunday morning saw the second part of the ESCA spring double-header with the 25 mile event.  In glorious sunshine Nick Dwyer was back south of the border spearheading the thirteen strong Lewes Wanderers challenge.  His time of 53 minutes and 24 seconds was good enough for 5th place of the 65 finishers. He was ably supported by 8th place Brett Davis (55:40) and 12th placed Mark Frost (56:47) as Lewes claimed second place in the team competition.

As per the day before the sole personal best came from among the club’s female contingent as Kate Mankelow improved her mark by nearly two minutes to 1:07:17.  Again just as on Saturday the club’s best female performer was Lisa Davis who took third place among the ten ladies to enter and a fine 30th overall thanks to her time of 1:00:55, in the course of which she actually rode the 10 mile course which formed the middle section of the 25 faster than 24 hours earlier.