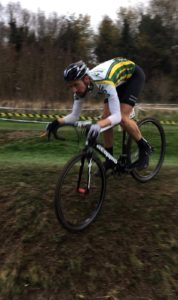 The Kinesis UK London and South East Cyclo Cross League returned to East Brighton Park on Sunday 25th November for Round 8 of the series and the fourth and final round of the Sussex League.

Back on 30th September for Rounds 4 of the London League and 2 of the Sussex the warm, dry and fast conditions had suited Lewes Wanderer Patrick Hough down to the ground as he pulled off a fabulous victory in the race for men under 40.

This time around it was somewhat cooler and slippery from recent rain and the organisers from the Sussex Cycle Racing League had reversed the direction of the course sending the riders up some precipitous banks that only the top bike handlers could ride up, the mere mortals left to clamber up as best they could.

It didn’t seem to matter to Patrick as he stayed within the leading quartet for the first five of the thirteen laps before forging to the front on lap 6 never to be headed on his way to the chequered flag.

In the earlier races for men in their forties and for the over 50s the Lewes men experienced mixed fortunes.  In the former Dan Street started 17th and managed to more or less hold station to finish 16th.

In the same race Paget Cohen started well in front of his good friend Darren Haynes, but found himself a dozen places behind him on only the first circuit.  He fought back to be on Darren’s rear wheel by lap 3 and the pair traded places up until the 8th and last lap when the latest of Paget’s minor offs saw him drop his chain and lose over 3 minutes and 14 places while sorting it out.  While Darren maintained his 40th position Paget crossed the line in 55th out of 70 riders.

Club Chairman Dom Lowden suffered similar misfortune as while he began the race for over 50s on the grid a row in front of his ever-consistent club-mate Stephen Burgess a series of falls on just about every lap meant that he never quite got back in front and Stephen got the better of this encounter finishing 32nd of the 57 starters to Dom’s 37th with both a lap down on the winner.

Patrick’s victory helped him clinch the Lewes Wanderers Cyclo-Cross Trophy based on results in the four Sussex based rounds with Dan Street a strong second.

Away from cyclo-cross it was confirmed this week that Lisa Davis set two new Sussex Cyclists Association records during 2018.  Her time of 2 hours 10 minutes and 2 seconds over 50 miles on the 1st July was a new ladies mark and her average speed of 23.517mph for time-trials over 10, 25 and 50 miles set a new ladies Best All-Rounder record speed.