If it wasn’t bad enough rising at dawn and with the temperature barely above zero in order to race a time-trial on quiet roads then to be stopped by the police mid-event is surely adding insult to injury.  This was the fate that befell Lewes Wanderer Kate Thomas (nee Mankelow) on the morning of Saturday 21st April, when she and her father John Mankelow were intending to compete in the Catford CC 10 mile TT up and back the A21 in Kent.

To make matters worse this is a notoriously fast course due to starting at the top of the steep slip-road near Southborough and it was on this descent that Kate was pulled over, despite her having a number on her back and being one of many setting off on the same road at one minute intervals and the police having been notified of the event by the organisers as is mandatory.  Suffice to say no personal bests were recorded although Kate did at least finish.

The following afternoon Club Chairman Dom Lowden took part in the GS Vecchi Spring Classic near WInchester.  In a bunch race of five laps of 9.26 miles he crossed the line in 5th place out of eleven racers in the 60-64 year age group.

In the first of nine evening time-trials run by Eastbourne Rovers CC on Thursday 18th April there were a brace of Lewes riders in the field of twenty-four.  By now the cold spell had given way to spring warmth and that was reflected in the times. Robert Rollings bagged second place with a rapid time of 21 minutes and 35 seconds, while 7th placed Richard Burchett reduced his personal best by almost half-a-minute to 22:39. 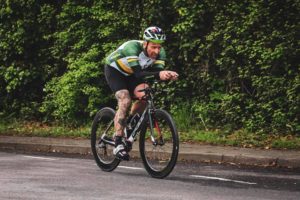 Double that number of Wanderers participated in Crawley Wheelers’ Sporting 41.59 mile time-trial on the hot and sunny morning of Good Friday.  It wasn’t a particularly good Friday for them in terms of results, but they all did respectably. Best placed was Rob Pelham in 22nd with a time of 1 hour, 46 minutes and 20 seconds.  Paul Fletcher and Dom Lowden both competed on road bikes and finished 32nd in 1:50:05 and 44th in 1:55:53 respectively. Jon Collett was 53rd of 58 finishers in 2:07:10.