Saturday 27th April saw the first of the East Sussex Cycling Association time-trial double-header, a 10-mile event promoted by Lewes Wanderers’ Rob Pelham.  Twenty of his club-mates were attracted to the start-line on what was a cool, dry morning, although by far the biggest factor affecting the riders were gusting gale force winds.  Initially they would be generally in the competitors favour as they pushed them down the A22 to the Boship Roundabout, but the return leg back to East Hoathly would be a test of tenacity and bike handling as they fought into the teeth of the gale. 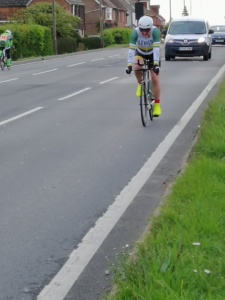 There would be double delight in the Dwyer household as both father and daughter came away with terrific results.  Seasoned campaigner Nick claimed fifth place overall in an impressive time of 21 minutes and 46 seconds, but arguably the ride of the day came from his daughter Anna (39th overall) who reduced her personal best by three-and-a-half minutes to 25 minutes and 23 seconds.  In an event won by former-Wanderer Jos Lowden (The Independent Pedaler) in a time only 5 seconds slower than Nick, Anna was fourth fastest woman and quickest of the three female Wanderers. Kate Parrish recording 27:26 to finish 50th overall and 6th fastest female, just ahead of 53rd Sue Collett in 27:58.

The worst of the gusts that Storm Hannah had to offer had subsided by the following morning, but it was still a cold and blustery day for 74 competitors in the ESCA 25.  Once again Nick Dwyer proved the fastest man Lewes Wanderers had to offer as he scooped third place in a time of 53 minutes and 20 seconds while Brett Davis rode a fine 55:41 to claim 8th.  Just as he had on Saturday, Richard Burchett assumed the role of third quickest Wanderer in 27th albeit his time of just 6 seconds outside the hour smashed his personal best by over four-and-a-half minutes and between them the trio won the prize for second fastest team.

The only other personal best came from 46th placed Guy Brown who improved by minute to record a strong 1:03:49.  Seven places behind, Anna Dwyer backed up her performance from the day before to again be the fastest female Wanderer (and fifth overall) in 1:05:16.  Sue Collett (1:12:03 and 66th) again had to settle for third as Kate Thomas recorded 1:10:22 to finish 64th overall and 8th fastest lady, one place ahead of Sue.