Round 9 of Lewes Wanderers’ series of 10-mile time-trials took place on the evening of Monday 1st July.  Behind the clear winner - Nick Dwyer in 20 minutes and 49 seconds - the battle for 2nd place was closely fought.  Just coming out on top was Richard Burchett in 22:47, 12 seconds ahead of Paul Fletcher. Improving on his personal best by 17 seconds, but just failing by 2 seconds to crack the 23 minute barrier was 4th placed Martin Baddeley, but he did just get the better of Gavin Richards (23:15).

Fastest of the two females in the field of 17 riders was Anna Dwyer in 7th with a time of 24:56, ahead of Kate Thomas in 26:20 (10th).  Roadworks on the A22 will enforce the adoption of a new course for the remaining rounds and it will be interesting to see how that affects times and standings.

The following evening Mark Frost was the solitary Wanderer taking part in a Brighton Excelsior 10-mile event near Steyning.  His time of just 1 second inside 22 minutes left him 7th from 26 competitors.

Nick and his daughter Anna were up in Hampshire on Wednesday evening for an a3crg 25-mile event.  Opportunities for improvement are at their greatest when you’re new to a sport, but to improve her PB by 5 minutes and 1 second to just 15 seconds outside of the hour was truly an impressive performance by Anna as she came home 11th of the 18 female competitors.  Nick had his chain come off, which forced him to stop to re-engage, but he still recorded a remarkable 52:45 to finish 10th in his category. 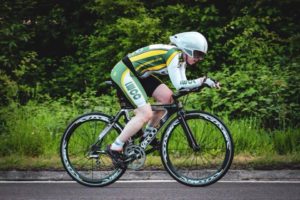 A trio of Lewes Wanderers took part in a Crawley Wheelers 10-mile time-trial early on Saturday 6th July.  Richard Burchett finished 25th out of 42 entrants with his time of 24 minutes dead. In 32nd came Jon Collett in 25:34, while just two places and 18 seconds behind was his wife Sue who was 4th out of the 7 female entrants.