Back on the evening of Tuesday 25th August Lewes Wanderers Dan Street and Ed Tuckley were among twenty-five riders competing in Brighton Mitre’s hill climb up mill hill out of Shoreham.  Dan placed 7th in a time of 8 minutes and 52 seconds while Ed recorded a time of 10 minutes precisely to finish 16th.

Lewes Wanderer Sally Turner was in Poland on Thursday 29th August to compete in the UCI Gran Fondo Time-Trial World Championships.  She flew round the 18.3 kilometre course on the rural outskirts of Poznan in 27 minutes and 26 seconds to earn the silver medal from the field of 20 women in the 40-44 year age group.

On the morning of Saturday 31st August a trio of female Wanderers were contesting the Road Time Trial Council National 10-mile Championship along the A11 near Newmarket, Cambridgeshire.  Anna Dwyer equalled her personal best of 23 minutes and 16 seconds to finish 37th out of 62 riders. Half-a-dozen places ahead of her was Lisa Davis racing for trainSharp and recording 22:43, but the star of the show was undoubtedly 2017 National Hill Climb Champion Joscelin Lowden (The Independent Pedaler) who rocketed round in just 19 minutes and 42 seconds to add to her trophy collection by a full 19 seconds.

If it’s September then there must be cyclo-cross and Round 1 of the Kinesis UK London and South East League was held at Stanmer Park Brighton on the dry and bright afternoon of Sunday 1st and was promoted by VC Jubilee Youth Cycle Club.

Lewes Wanderers sent a healthy contingent just down the A27 with a quartet competing in the earlier race for men in their forties and a further trio in the following contest for men over 50.

Based on previous results Dan Street was given the best grid position amongst the field of 88 in the former event.  He lost several places at the start, but by the third of six laps had more-or-less recovered to back where he started in the pecking order eventually claiming a very strong 18th place.

Paget Cohen and Darren Haynes began alongside one another a few rows back, but Paget failed to clip in first time and by the end of lap one was ten places behind Darren.  As the race wore on Paget was able to take advantage of his superior climbing ability on the steep grassy slopes to overtake his clubmate on the penultimate circuit. Darren briefly retook the 38th place they were fighting over, but Paget went away again on the hills to meet the chequered flag five places in front in 33rd position.  Richard Frost finished a lap down in 81st. 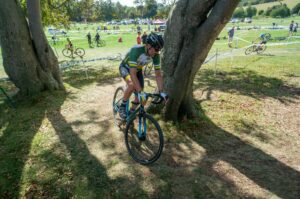 In the following race for the over 50s and women Alan Lester took advantage of his grid position to lead the three Wanderers from the start, but Stephen Burgess made swift progress from the back rows to be only half-a-dozen places behind at the end of the first circuit.  Stephen generally held station from then on, but Alan began to fade such that Stephen was right behind him at the bell signalling the last lap.

At the end of which Stephen was 10 seconds and one place ahead of Alan in 46th overall and 7th amongst the men over 60.  Alan placed 42nd among the 58 men in their 50s, while Chris Hough was 64th out 67 overall and 10th of the 11 men over 60.  Racing for URDT Kathryn ‘Mugs’ Gohl came 4th out of the six women under 40 competing on her debut at the discipline.