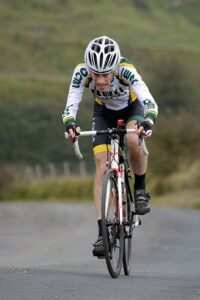 On Saturday 28th September Ed Tuckley was the only Lewes Wanderer among 11 entrants in the Sussex Cycling Association hill climb up the fearsome Steyning Bostal.  His time of 5 minutes 47.7 seconds was good enough for 7th place.

The same day clubmate Peter Kilby was among 49 starters in the Kingston Wheelers CC event up Leith Hill in Surrey.  He came 36th of the 48 finishers in a time of 5 minutes 14.3 seconds.

The last of Lewes Wanderers' 2019 programme of time-trials was held on Sunday 6th October.  Threatened heavy showers perhaps accounted for why four of the 18 pairs to have pre-entered decided not to participate, but as it turned out they scudded over early leaving just wet roads to navigate.

The Gents 2-up GP is a slightly misleading name as it’s also open to women, the only criteria being that the rider being timed must be a 'veteran', that is over 40 years of age at the date of the event and they are only allowed to overtake their partner in the final 200 metres of the 17.2 mile course.

With two of the pairs representing the host club among the no-shows it was left to Chairman Dom Lowden, paired with Mark Frost to try to uphold club honour. Their time of 41 minutes and 49 seconds was good enough for 4th place, but crucially 21 seconds and one position ahead of Dom’s daughter Joscelin Lowden (The Independent Pedaler) who teamed up with fellow-Wanderer Lisa Davis representing trainSharp.

Father and son Paul and Michael Valks (54:10) may only have finished in 13th place, but as the only team comprised entirely of family members did at least ride away with some prize money.

Peter Baker was was due to compete in the VTTA London and Home Counties 25-miler that same morning, but having driven up there he found the event cancelled due to a double booking of the event headquarters.  He did at least have the consolation of being proclaimed the Audax UK Mileage of the Year award for an incredible 8th consecutive time thanks to recording 20,211 miles in 2018.