Almost two months later than usual Lewes Wanderers hosted their 17.68-mile Circuit of Earwig time-trial on Thursday 13th August. On a sweltering evening when many could have been forgiven for wanting to lie down in a darkened room the 18 racers who took to the start line were rewarded with some blistering times.

Queen of the show was Kate Parrish who, in her maiden attempt at the event, reduced the club’s ladies course record by 8 seconds to 43 minutes and 44 seconds in claiming 9th place. There may have only been one other female competitor, but Kate Thomas took a minute and 3 seconds off her previous best in placing 12th in 27:24.

The personal bests weren’t the sole domain of the fairer sex as, behind the overall victor and former-Wanderer Pete Morris (38:15) and runner-up Nick Dwyer (39:05) the next four Lewes men all beat their previous times. 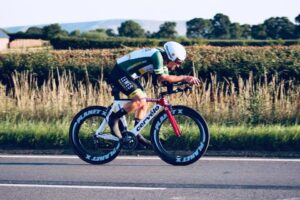 Third place went to Paul Fletcher who improved by a huge 1 minute and 20 seconds to 40:30. He needed to as 4th placed Dan Street reduced his best by 40 seconds to 40:47, just a solitary second ahead of Richard Burchett who showed a 63 second improvement.

6th placed Gavin Richards (41:29) managed to slice 4 seconds off his previous mark while 11th placed Vince Busk hacked a mammoth 1:04 off his to stop the watch after exactly 45 minutes.

Back on Sunday 9th August a trio of club members ventured east to participate in a Medway Velo promoted 10 mile time-trial on the A2070 between Ham Street and the southern outskirts of Ashford. Despite the heavens briefly opening it was well worth the early start as all three had something to celebrate.

Representing trainSharp Lisa Davis proved fastest of the 15 females racing as she rocketed up and down the course in 22 minutes and 58 seconds. She will clearly need to watch her back in future however as she was just two seconds ahead of a thirteen year old patently destined for great things!

Also racing for trainSharp her husband Brett was a superb 6th overall from 107 finishers in a swift 20:32, while Richard Burchett survived a slide at the roundabout turn to take 42 seconds off his personal best as he finished 39th in 21:51.

Following in the wheel-tracks of some of their clubmates over the past few weeks seven Wanderers journeyed down to the historic Good Motor Racing Circuit on the evening of Tuesday 11th August for the latest of the a3crg promoted 11.8-mile time-trials over 5 laps of the course.

It was mighty close behind them in the midfield with 47th positioned Dan Street (26:57), just one place and 2 seconds ahead of Richard Burchett, with Paul Fletcher just 4 seconds and two places further back.