Four Lewes Wanderers took part in the Sussex Cyclists’ Association hill climb on the damp morning of Saturday 2nd October.  It would have been six, but Peter Baker sadly crashed while on a training ride the day before and Dan Street was another non-starter.

Despite the reduced numbers there was still some success.  Kate Parrish was runner up amongst the nine female entrants thanks to scaling the fearsome slopes of Steyning Bostal in 5 minutes 40.84 seconds.  Joe Benians was 12th out of 51 in 4:40.66, while Peter Kilby was 39th in 5:58.84 and Ashley Baker 43rd in 6:02.32. 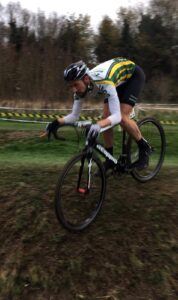 The following day Patrick Hough was the lone Wanderer to travel to the grounds of Herne Hill Velodrome for Round 3 of the London and South East CycloCross League promoted by Herne Hill Youth Cycle Club.  Based on his most recent results he was gridded 13th out of a field of 67 men under 40 for an hour long race on a course made slick by yet more rain.

He had slipped to 15th by the end of the first of ten laps, but four quick circuits saw him rise to 11th and then to 8th by midrace.  A slower lap saw him drop to 10th, but he fought back to a fine 8th place from 60 finishers.

The Road Time Trials Council National Closed Circuit Championships took place around 5 laps of Thruxton Motor Racing Circuit in Hampshire on the morning of Sunday 10th.  Sally Turner (trainSharp) was a fine 16th from 43 overall and fastest in her age group with a time of 26:31.  Mechanical issues beset Anya Tamplin (Hunt Bike Wheels), but she completed the course in 29:36 for 26th of 28 in her age category and 33rd overall.

While they were speeding around a purpose built facility a quintet of Wanderers were crawling their way up the 25% slopes of Yorks Hill, west of Sevenoaksin the annual Catford CC Hill Climb.  Will Lowden (CC Sudbury) finished a superb 13th overall and 2nd Junior in a time of 2 minutes 13.5 seconds.  That man Joe Benians came 31st in 2:28; Tom Moss (Southborough & District Wheelers) 45th in 2:39.8; Ashley Baker 80th in 3:19.9 and Roger Hutchings 86th of 91 in 3:30.9.

Dan Street was the only Lewes rider to take part in Round 4 of the Challenge Tyres London and South East Cyclo-Cross League that afternoon.  Promoted by Brixton CC the 45 minute race made use of the landscaped grounds of Crystal Palace Park.  Gridded 37th Dan gained a couple of places on the first of half-a-dozen laps; slipped back a few on the next circuit, but fought his way back to 35th from 72 finishers at the flag.