Two members of Lewes Wanderers were in illustrious company as they took part in the National Championships in Lincolnshire in the past week.  The time-trial Champions were determined on Thursday 14th October on a sporting 29.4km course of 2 rolling laps around the Wolds north-east of the city itself.

Anya Tamplin (Hunt Bike Wheels) completed the course in 49 minutes 57.36 seconds to place 13th from 18in the under-23 age group.  In the Elite Championship new world hour-record holder Joss Lowden (Drops-Le Col/Tempur) claimed the silver medal thanks to her time of 44 minutes dead.

Conditions took a turn for the worse for Sunday’s Road Race which was an 8-lap affair with an ascent of the brutal 20% cobbled climb of Lincoln’s Michaelgate each time around.  Anya started the under-23 race, but abandoned after 6 circuits.  Joss was well supported by her team and revelled on the steep ascents to race to a superb third place.

Back on the local scene there was a double-header of hill climb action on the East Sussex Downs.  Firle Beacon was the scene for the East Sussex Cycling Association event on the damp morning of Saturday 16th October.  Joe Benians fared best of the quartet of Wanderers as he finished 16th from 56 in a time of 4 minutes 36.9 seconds.  Tom Moss (Southborough & District Wheelers) was 21st in 5:01.4; Ed Tuckley 29th in 5:22.1 and Peter Kilby 36th in 5:54.3.

Roger Hutchings finished in 8th place in the road bike category of an ESCA “Hardriders” time-trial the following morning.  He covered the 25-mile West Sussex based course in 1 hour 20 minutes and 40 seconds.

Round 5 of the Challenge Tyres London and South East Cyclo Cross League took place in the undulating grounds of Somerhill School near Tonbridge on Sunday 17th October.  In the women’s race Mugs Gohl (Nice Brew Racing) started 15th and finished 15th (from 27) and 6th of 8 under-40s due to half-a-dozen consistent laps. 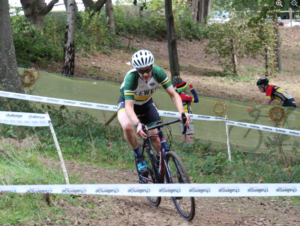 In the race for over 50s Darren Haynes gained four places from his grid position of 34th on the first lap, but dropped to 42nd the next time around following a spill and faced an uphill battle to recover to 39th from 59 finishers by the end of the six laps.  Amongst the fourteen over-60s Stephen Burgess was as high as a podium spot on the opening tour, but had to settle for a strong 5th position.

Dan Street had a superb race in the race for over-40s.  Gridded 29th he gained six places on the first lap and had risen to 18th from 61 by the fourth of seven laps where he remained at the chequered flag.