It was a sweltering evening on Monday 12th June for the seventh round of Lewes Wanderers 10 mile time-trials and that was reflected in a large field of 31 and some fast times.  Tom Glandfield took his fourth victory of the series and in his quickest time yet (21:16), but hot on his heels and setting new personal bests were runner Callum Middleton (21:53), third placed Brett Davis (22:02) and fifth place Aidan McConville (22:44).  Just as Callum broke the 22 minute barrier for the first time 8th placed Dan Street (22:57) beat 23 minutes for the inaugural occasion and back in 22nd position Rich Streeter (25:44) took 3 seconds short of a minute off his PB set just last week.  Those 3 seconds were picked up by 10th placed Martin Baddeley (23:35) in the margin he snuck under his previous best.  It was no less hot the following night for Worthing Excelsior’s version of the event on what is generally accepted to be a slightly faster course.  This was born out by Peter Barling (23:23)who went 30 seconds quicker than he had 24 hours earlier in claiming 14th place among the 44 entrants, seven positions behind club-mate Mark Frost (22:45). 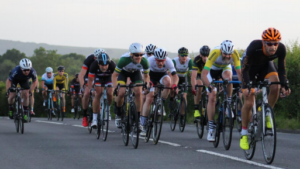 Thursday 15th June saw the third and final round of Lewes Wanderers’ Criterium races and with the standings so close and double points on offer the overall title was very much still up for grabs.  With a stiff wind blowing up the Broyle riders were reluctant to ride on the front and the few attempted breaks were soon brought back on the Laughton Road which meant the prizes would likely go to those who’d brought their sprinting legs.  The first test in this regard came at the intermediate “prime” sprint up Shortgate Lane at the start of the second lap.  Series leader John Cordner (trainSharp Club) strengthened his claim for the title by pipping third overall Richard Moult (Brighton Mitre) to the line with John’s teammate Martin Markowski mopping up third.  John was beaten to the line next time round by Dan Helyer (Eastbourne Rovers), but Shane Pope (Crawley Wheelers) kept his hopes alive by claiming third.  Such were the permutations and the complicated mathematics that it is unlikely they realised it at the time, but when Cordner beat Markowski and Pope in the rush to the line on the next lap he actually secured the overall title in the process.  There was still the glory of a stage win to ride for though and thus all attempts to break away were dragged back by the more organised teams until the final few 100 metres when Lee Pendlebury (Crawley Wheelers) and Dan Helyer escaped to claim the top two steps of the podium ahead of Jason Ginn (The Cycle Room) who won the bunch sprint.  Behind them race organiser Darren Haynes came off the wheel of his club mate Martin Baddeley to take a clear and popular fourth - just rewards for all his hard work in putting on the event.

Sunday 18th June dawned sunny and baking hot even at the time when most people were rising from their beds which was a shame for the dozen Wanderers who had committed themselves to undertake a long distance test against the clock.  Up near Newmarket on the A11 Lisa Davis survived both the heat and being stuck by the wing mirror of a passing van to complete the Eastern Counties CA 100 mile event in 4 hours 19 minutes and 30 seconds, over half-an-hour faster than her previous best.  Back in Sussex nearly a quarter of the 48 finishers in the East Sussex Cycling Association 50 were Lewes riders with Tom Glandfield faring best with a fifth place due to his time of 1:54:44.  He was backed up by Robert Rollings in 9th with 1:59:30 and claiming fastest among the under 40s, while Peter Baker (14th in 2:02:06) triumphed in the 55-59 age group and John Mankelow (2:19:18) among those 65 and over.  Ride of the day arguably came from Aidan McConville who clocked 2:02:36 on a road bike with few of the aerodynamic advantages of a time-trial specific machine and bagged 15th place in the process.