On Saturday 6th April Lewes Wanderers Brett Davis undertook the long drive to Cambridgeshire to compete in the Lea Valley CC 25 mile time trial along the A11 near Newmarket.  It certainly proved worth the journey as he came away with a new personal best by 49 seconds of 51 minutes and 46 seconds.

The first of Lewes Wanderers four non-standard time-trials took place the following morning when the 18.11 mile Circuit of Danehill took place.  Perhaps due to the cold and misty conditions there was a disappointing turnout of only seventeen competitors. The roads were at least dry and the combatants could enjoy a tailwind from the Chelwood Gate start all the way to the mini-roundabout at North Chailey, even if it wasn’t in their favour along the A272 to Maresfield and somewhat against them as they gradually climbed on to the Ashdown Forest and Wych Cross.

Despite doing the right thing and turning around to recover some parts that somewhat alarmingly came off his bike en route Nick Dwyer did enough to claim victory in a time of 44 minutes and 35 seconds, just 11 seconds ahead of Rob Rollings.  Joe Benians time of 48:46 granted him a terrific third in his debut at the event. 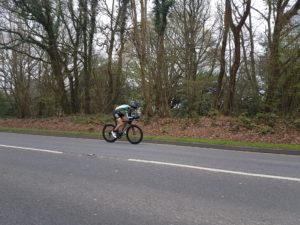 The club have initiated a new competition for riders participating in these four events without the benefit of a time-trial bike or recognised aerodynamic aids and the first round was hotly contested.  In 5th placed overall in 49:56 Aidan McConville took a clear victory, but only 10 seconds separated 2nd placed Stuart Lofting (52:02 and 6th overall) and Dom Lowden (52:12 and 7th) in 3rd.

8th placed Charlie Middleton (52:17) took a minute and 24 seconds off his personal-best, while 15th Sue Collett (58:46) reduced her fastest time by 43 seconds, but had to give best amongst the female Wanderers to Kate Thomas who was 12th in 56:58.