Sunday 31st March saw the second of the East Sussex Cycling Association time-trials of the year - the 2-up.  Roadworks through the centre of Ringmer necessitated a change from the usual 23.9 mile course, with Lewes Wanderers' 17.68 mile "Circuit of Earwig" alternative being adopted.

What with the clocks having gone forward an hour overnight and the temperature having dropped considerably from the day before the twenty-four pairs of riders to take to the start line could have been forgiven for not being at their best.

At least it was still dry and they could enjoy a stiff tailwind all the way from Little Horsted to the edge of Lewes to make up for fighting into it from Ringmer to Golden Cross and along the A22.

A quartet of dynamic duos represented Lewes with last year's runner-up Brett Davis and Nick Dwyer again proving the fastest.  Their time of 38 minutes and 44 seconds granting then fourth place this time around. 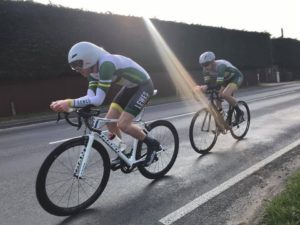 Fifth placed in 2018 Aidan McConville and Dan Street had to settle for ninth best with their time of 41:09, not only that but they were beaten by eight seconds and one position by the new pairing of Richard Burchett and Rob Rollings (41:01).  Just overtaken on the road by that pair and in 22ndof the 24 couples were Sue Collett and Rob Pelham in 49:18.

Down at Preston Park in Brighton for Round 6 of the Sussex Cycle Racing League Lewes Wanderers' Joe Benians recorded a fine third place out of 27 racers and in so doing collected enough ranking points to progress to the next category of racing.