After the previous Monday’s event was cancelled due to torrential rain Round 7 of Lewes Wanderers’ series of 10-mile time-trials took place on Monday 17th June and incorporated the club’s Fixed Wheel Championship.  Behind Pete Morris (ASL) who completed the course in just 6 seconds over 21 minutes Joe Benians reduced his personal best by a full 25 seconds to 23:05 to claim bragging rights among the host club’s riders, just ahead of Duncan Fuller (23:13), Peter Baker (23:17) and Paul Fletcher (23:28).

In 6th overall was Club Chairman Dom Lowden in a rapid 23:33 which made him a clear winner of the “Single Cog Trophy”.  He did so while riding the same bike that his son Jamie used to win the same prize back in 2012.

There were also marginal personal bests by 7th placed Roger Hutchings (24:25) and Graham Faultless (25:38 and 10th) and a fine debut by Dom’s daughter Hattie in 9th with a time of 25:11, just 8 seconds slower than fastest female Anna Dwyer in 8th, with 13th placed Sue Collett (26:42) the other female Wanderer to compete in a field of 22.

On the evening of Wednesday 19th June Peter Baker was one of half-a-dozen riders to compete in a Hastings St Leonards Cycling Club time-trial on 17.71 miles from Ore to Rye and back along the A259.  His time of 45 minutes and 31 seconds placing him 2nd. The following night he was a guest of Eastbourne Rovers CC for a 7.2 mile anti-clockwise loop via Birling Gap and Beachy Head. This time he was 4th out of 12 with a time of 18 minutes and 51 seconds.

The same evening saw the third and final round of Lewes Wanderers Criterium race series.  Chris Filewood (ASL) held a three point lead over Ben Tappenden (trainSharp) going into the race and he extended that advantage by ten points in winning the first “Prime” sprint on the second of five laps, beating James Bullen (URDT) and his teammate and Prime sprints leader Steve Kane to the line.

The overall competition was still up for grabs come the end of the fifth lap, but was claimed in convincing fashion by Filewood who edged Matt Twelvetrees (Reflex Racing) and Lee Pendlebury (Crawley Wheelers) to the chequered flag.  Tomlinson bagged fourth and with it second overall as Tappeden suffered a small off on the final circuit and was dragged back to the bunch by his team, but had nothing left for the sprint. Lewes Wanderers’ only entrant Joe Benians crossed the line in an excellent 8th place in just his third attempt. 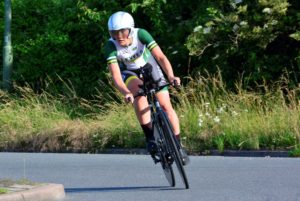 It was a family affair at the Horsham CC 10-mile time-trial on the A283 near Steyning on Saturday 22nd June.  Father Dominic finished 24 out of 44 in his time of 23 minutes and 31 seconds. His daughter Harriet smashed her personal best set earlier in the week by 49 seconds to finish 29th in 24:20 and the only female faster was her sister Jos (The Independent Pedaler) who was 6th in 21:31.

Nick Dwyer only finished 12th out of 81 in the Blazing Saddles 50-mile time-trial near Petersfield on Sunday morning.  However his time of 1 hour 41 minutes and 59 seconds beat his own club record set on the same course four years earlier by over three minutes.