The weekend of 2nd-3rd September got off to a disappointing start for Lewes Wanderers and Nick Dwyer in particular.  He had already crossed the line having completed the Charlotteville Cycling Club 10 in an impressive 21 minutes and three seconds when one of the other 115 competitors was struck by a car while still en route to the start line near Alton in Hampshire.  The rider was reported as conscious, but had sustained injuries sufficient for medical services to be summoned and the event abandoned as nearly half the field of 116 had yet to start.

The three Lewes entrants for the Southern Counties Cycling Union 25 near Crawley on Sunday morning were spared such misfortune even if warm sunny weather was in short supply.  Tom Glandfield finished in a fine 6th place thanks to his time of 56 minutes and 12 seconds.  Less than a minute behind in 15th place and in his third fastest time ever over the distance was Peter Baker who posted 57:09, while John Mankelow’s 1:06:32 left him 54th of the 72 finishers. 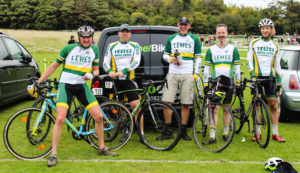 It was mild, but overcast in Stanmer Park, Brighton at noon on Sunday 3rd September for Round 1 of the Kinesis UK London & South East Cyclo Cross League promoted by Brighton Excelsior and VC Jubilee.  A possibly unprecedented half-a-dozen Lewes Wanderers lined up for the start of the race for 40-50 year old men among a huge field of 97 apprehensive riders.  The experienced Darren Haynes made a good start and was possibly running in the top 30 when one of his tyres came unstuck from the rim on the first lap.  Thankfully it occurred just before the pits where he had stashed a spare wheel, but it demoted him to near the rear of the pack.  Rob Pelham was left to spearhead the Wanderers challenge and he survived a brush with a tree in the extensive technical section through the woods, while Alan Lester suffered a minor off shortly after successfully hurdling the planks positioned strategically across the course when the leaders came by to lap him and he momentarily lost concentration and found himself entangled with the tape marking the boundary of the circuit.  Official results are delayed due to technical issues with the new timing system, but of the six Wanderers Darren fought back to finish 3rd behind Rob and Paget Cohen, but ahead of Alan, Richard Frost and debutant Jon Collett all of whom greatly enjoyed the event and are keen to tackle as many of the dozen remaining rounds as possible.  Stephen Burgess was the other Lewes rider in action on the day in the race for gentlemen aged over 50, but there were a large contingent out supporting who were much appreciated by those who rode.

All rider limits are absolute and will not be exceeded under any circumstances. They are…