The first of Lewes Wanderers 12 Round series of 10 mile time-trials for 2018 took place on the sweltering evening of Bank Holiday Monday 7th May.  The dry sunny weather and the prospect of fast times drew out the maximum permitted field of 30 riders of whom 25 were from the host club plus 5 guests.  As it turned out the personal bests were almost exclusively recorded by the quartet of female Wanderers to take to the start line on the A22 just outside East Hoathly.  Lisa Davis claimed 14th place overall and victory among the ladies with her scorching time of 24 minutes and 10 seconds, which sliced a further 5 seconds off her PB set only two days before.  Second fastest female, and in equal 20th overall, fell to Kathryn Gohl (25:43) who improved by 44 seconds on her debut performance last month.  She just pipped Kate Mankelow (25:58 and 22nd) who was only 8 seconds outside her PB, but Sue Collett (26:31 and 24th overall) hacked a further one minute and one second off the mark she only set a few weeks earlier. 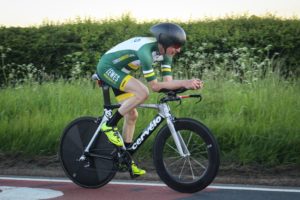 Overall victory was taken in style by former-Wanderer Pete Morris (now ASL) in a blistering 20 minutes and 40 seconds, but behind him the internecine battle for supremacy over this distance raged on.  Rob Rollings (21:41) was over half-a-minute slower than he had ridden on the Saturday, but he was still just quick enough to grab runners-up spot and edge out Brett Davis (21:44) and Nick Dwyer (21:50) just as he had at the weekend.  Behind them Aidan McConville (22:36) missed his PB by 5 seconds, but posted an excellent 6th while Will Herbert made a superb debut with a time a mere 2 seconds outside of 23 minutes and an 8th place finish.  Ride-of-the-night arguably came from 18th placed Geoff Letts whose winter training clearly paid dividends as he reduced his personal best by 2 seconds shy of 2 minutes to an impressive 25 minutes and 25 seconds.

Alan Lester was the lone Lewes Wanderer to venture down to Preston Park track for the fourth and final round of the Wednesday Track League on 9th May.  His best result of the evening was a 10th place in what is called ‘Win and Out’, whereby a bunch of 20 or more riders contest a sprint at the end of each of six laps with the first across the line being each time being withdrawn to allow the remainder to battle things out next time around.

The weather had taken a turn for the worse come Saturday 12th May, so much so that Nick Dwyer and Peter Baker drove all the way down to Liss to compete in the Hampshire Road Club 10 only to find that the organisers had called it off due to the amount of standing water on the A3 based course.  Conditions were evidently not quite so bad out near Tenterden in Kent where John Mankelow ploughed around the Southborough & District Wheelers 10 mile event in 26 minutes and 46 seconds to finish 25th of the 38 riders to complete the course.

The following morning Mark Frost was the sole Wanderer entered in the Worthing Excelsior CC 25 mile time-trial down near Steyning.  On a mild, but dry morning his time of 59 minutes and 30 seconds was somewhat off his best, but still good enough for 10th place among the 34 on the results sheet.

On the same morning Lewes Wanderers had the pleasure of escorting a journalist and a photographer from Cycling Weekly magazine on the club’s weekly social ride.  The route for the day took the riders up across the beautiful Ashdown Forest, then through the charming villages of Nutley, Chelwood Gate and Horsted Keynes. From there the group of over 30 riders headed south through Chailey for a jaunt through the twisting narrow streets of the historic county town of East Sussex from which the club gets its name.  After which there was the scenic climb past the wind turbine overlooking Ringmer, a swift descent past Glyndebourne Opera House and a final sprint along the A27 cycle path to Middle Farm where refreshments were taken in preparation for everyone riding home. The weather was kind and roughly a quarter of the club’s membership tagged along to enjoy at least some of the ride, a report on which is due to appear in the magazine on the week of Thursday June 28th.