The annual East Sussex Cycling Association Reliability Trial took place on Sunday 17th November.  Organising club Brighton Mitre had devised a typically tough course of just over 50 miles with a couple of checkpoints and plenty of hills along the way, including the little used Dewlands Lane into Rotherfield and the locally notorious Kidds Hill up onto the Ashdown Forest.

Entrants could choose to try to complete this anti-clockwise loop in three, three-and-a-half or four hours depending on their level of ability and confidence.  Twenty Lewes Wanderers signed up in advance to ride, but with half-a-dozen non-starters they were reduced to six attempting to complete within three-and-a-half hours and eight within the maximum time allowed.

The 178 riders who were sent on their way in groups at five minute intervals from 08:15 onwards from were treated to a cold, but thankfully dry and sunny morning although many of the quiet country lanes that comprised the course were running with water and slick with leaves blown off the trees during recent storms not to mention still open for use by pedestrians, horse-riders and motorists.

Eastbourne Rovers successfully defended the ‘Rally Shield’ as 41 of their 43 starters made the time cut with the host club claiming runner-up spot with 28 of 37 and Sussex Nomads claiming third with 13 qualifiers.

Lewes Wanderers came fourth with a dozen riders proving reliable by reaching the final checkpoint when they said they would.  Nick Dwyer, Dan Street and Aidan McConville rode together to comfortably complete within the shorter target time.

Much kudos to Ed Tuckley who completed a course featuring many slopes both up and down of more than 10% while riding fixed wheel with no choice of gear nor option to freewheel.

David Wilkins started with them, but lost touch and without the route committed to either memory or cycle computer was reliant on following riders from other clubs in order to just squeak within the time-limit.

Paget Cohen probably should have ridden with that group as he returned to East Hoathly with over half-an hour to spare before he was permitted to hand in his brevet card as proof of visiting the two checkpoints en route. 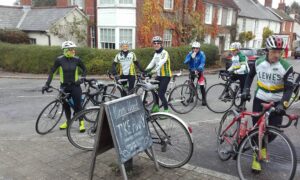 Father and daughter John Mankelow and Kate Thomas along with Graham Jeffs, Dave Beale, Stuart Kirkham and his partner Jolanta Zuravskaja paced their efforts far better to clock in without having to stand around getting cold.

Sadly Peter Fox snapped his chain after barely 11 miles.  He proved himself reliable in the sense of managing to affect a repair by the roadside such that he was able to ride back to the HQ, but without visiting the checkpoints he was classified as a non-finisher.  By joining him to make sure he was alright his partner Gina Boakes showed solidarity, but also sacrificed her own chances.

Lewes Wanderers’ husband and wife duo Brett and Lisa Davis rode for their other club trainSharp and just about got round within three-and-half hours despite three punctures incurred my members of their group.

LWCC is featured in Cycling Weekly!