The annual Lewes Wanderers Reliability Trial was held on the morning of Sunday 27th January.  Organiser Jon Collett had devised a tough anti-clockwise loop of 55 miles for the entrants to complete in either 3 hours and 15 minutes, 3 hours 45 minutes or 4 hours and 15 minutes depending in their level of confidence.

Having left the Fairwarp Village Hall headquarters the competitors barely had a chance to warm up before they were required to undertake a stiff ascent up on to the Ashdown Forest.  That was as nothing to the twin ramps required to cross Ardingly Reservoir to Balcombe.

The hills were less severe from then on, but the narrow lanes were wet and strewn with debris all the way to the Goddards Green checkpoint after 32 miles, where at least there were hot drinks and cakes available as recompense.

In normal circumstances the homeward leg through Hassocks, Ditchling, Cooksbridge and Barcombe wouldn’t have proven too challenging, but with so many miles in cold and blowy conditions in their legs it was a race against time for most to get back to Fairwarp in the time they said they would. 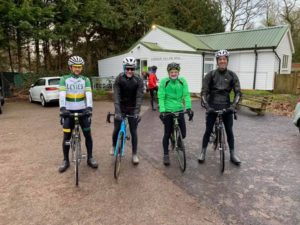 Disappointingly only 24 of the 55  who paid for pre-entry actually came under the starter’s orders; it perhaps having dawned on the no-shows quite how stiff a challenge they had signed up for.  Nine of the those twenty-four were among the first group to set off and with the most generous timescale. That said only four of them got round in time, three of those being from the host club.

The largest batch to take to the road were under slightly less relaxed time constraints.  That said eight of the dozen, including five of the half-dozen representing Lewes were successful.  In contrast only three of the eight registered actually attempted to complete the course within the tightest time-frame and no-one managed to do so.

The thirteenth and final Round of the London and South East Cyclo Cross League took place in Bexley on Saturday 26th January.  No Lewes Wanderers took part, but following the publication of the results those that had competed this past season got to find out where they finished in the final League standings.

Amongst men under 40 Patrick Hough was 25th out of 222 riders with 356 points, but from only 4 races with the best seven results to count.  Hence Dan Street was 27th out of 197 men in their forties with 362 points from six events. Paget Cohen was 51st with 268 points from seven events; Darren Haynes 63rd with 224 points from six races and Rob Pelham 110th with 107 points from three races.

It was very close between the Lewes men over 50 with Stephen Burgess, who accumulated 219 points from five events just edging Dom Lowden (214 points from four races) to 59th position.  Alan Lester was 74th out of 133 men to score with 136 points from a trio of events.