Lewes Wanderers were well represented in the East Sussex Cycling Association 10-mile time-trial on Saturday 11th September.  Fastest in the event promoted by Hastings & St Leonards CC and run on the A22 was Nick Dwyer in 5th in a time of 21 minutes and 17 seconds.  He was closely followed by Joe Benians in 10th in 22:01, but star of the show was Sally Turner (trainSharp) in 12th overall and fastest female in 22:46. 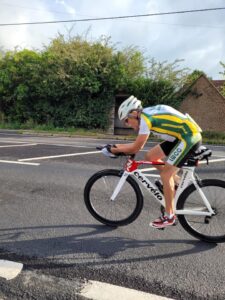 Gavin Richards (23:02) wasn’t far behind in 14th from 44, while Anna Dwyer (Drag2Zero) was 3rd fastest female and 24th overall in 24:19, 46 seconds and three positions in front of Peter Baker.  Sadly Kate Parrish failed to start due to a mechanical during her warm up.

Three of that half-dozen were back in action the following morning for the second half of the ESCA double-header.  This was over 25 miles and promoted by VC Merlin.  Once again Sally Turner was the cream-of-the-crop as she flew round in 57 minutes and 20 seconds to prove fastest of the four female competitors by nearly 10 minutes and place 8th overall.

Sally was the only Wanderer to beat the hour with Gavin Richards agonisingly clocking a time just one second over, although this was a personal best by 54 seconds and good enough for another 14th place.  Two places and 55 seconds behind was Joe Benians;  while Peter Baker was 18th in 1:02:05 and Mike Hannay 20th of the 29 finishers in 1:03:34.

Back on Sunday 5th September young Will Lowden (CC Sudbury) recorded a superb 53:39 over the same distance near Chelmsford in a ECCA-run event where he was second by just 3 seconds.

The hill-climb season started to heat up over the weekend of 29th and 30th September,…