Back on Sunday 22nd August Kate Parrish raced in a Catford CC 25-mile time trial, bizarrely held on roads south of Ashford.  Her time of 1 hour 4 minutes and 9 seconds was good enough to give her third spot on the podium amongst the half-dozen female entrants and 35th from 45 overall, but more importantly a new personal best, nearly two minutes faster than she rode earlier in the season. 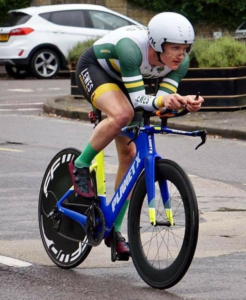 The following Sunday Anya Tamplin was among a 23-strong bunch for a 51-mile Surrey League road-race near Chiddingfold and promoted by VC Godalming & Haslemere.  18th place was a more than respectable result given she was the only female in the pack.

On Bank Holiday Monday Joe Benians and Paul Fletcher (trainSharp) featured among a field of 29 racers in the Sussex Cyclists’ Association 25-mile TT northwest of Billingshurst.  Joe was a fine 7th in 58:19, while Paul came 15th in 1:01:43.

Joe was back in action early on the morning of Saturday 4th September as he and 16 others sped up the A21 near Tonbridge before the traffic had a chance to build.  Joe’s superb time of 21:05 gave him 4th place and fastest road-bike in a Southborough & District Wheelers run event.

Roger Hutchings also took to the road bike as he took part in an Icknield RC 10-mile TT near Tring, Hertfordshire.  His time of 23:27 left him in 67th out of 108 finishers, with 5 failing to cross the line.

At the same time up near Bungay Suffolk that afternoon Dom Lowden placed 14th of 43 in a Norwich ABC run 10-miler with a time of 23:11.

Awards Dinner 2017 Round Up