With the time trial season now up and running Sunday 19th March was the date for that perennial favourite the East Sussex Cycling Association Hardriders.  Unlike last weekend’s Circuit of Laughton, and indeed most time-trials, this test against the watch features very few flat stretches of road.  With a route starting in Bodle Street Green down to Windmill Hill and Boreham Street; up through Ponts Green to Woods Corner then back via Three Cups and Rushlake Green there is little chance for riders to establish any sort of rhythm and every chance of meeting with a pothole, some wildlife, or any number of other hazards common to such quiet country lanes.

For 2017 the riders would face a further complication to their race strategy in the form of road-works springing up on the course just the day before due to a burst water main.  No stranger to such eventualities long-standing race promoter Peter Moon of Eastbourne Rovers CC hastily rewrote the rubric.  Competitors would start as normal and race the first 5.4 miles of the normally 15.06 mile circuit up to the top of the separately timed ascent of Agony Hill where they and the stopwatch would be temporarily brought to a halt.  The next 300 yards or so of the course would then be neutralised and not timed while racers navigated the impromptu interruption, before they and the clock would be restarted for the 9.5 mile blast to the finish.

Given the truncated lap and the arguable benefits to the athletes of being able to catch their breath it is a moot point as to whether any of the 10 personal bests set by the 20 Lewes Wanderers who took to the start line should stand.  That said there were some significant improvements in times that could not merely be accounted for by the brief hiatus in proceedings nor the 20mph tailwind the racers enjoyed along the exposed southern leg of the course. 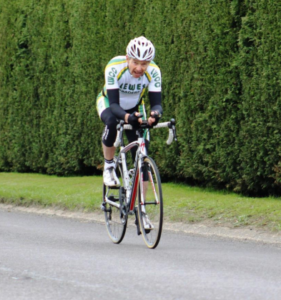 Most notable was that of Lisa Davis who took an astonishing 7 minutes and 52 seconds of her previous best and whose time of 46 minutes and 33 seconds was good enough to place her 46th of the 75 finishers and bag her third place among the 6 female entrants.  Her husband Brett was not entirely outshone as his time of 41:04 was 4 minutes and 39 seconds faster than he had gone before and placed him equal 22nd.  Six places back Darren Brockhurst (41:22) took exactly 4 minutes off his best, but left him 7 seconds and one position behind Dan Street (27th) who shaved 3:30 off his time of last year.  In 17th place Aidan McConville (40:38) beat his 2016 time by 2:44 while one place and 2 seconds ahead Dom Lowden reduced his PB by 2:34.  Sean Quinney finished in 13th place 12 months earlier and repeated the feat in 2017, although his time of 40:13 was 1:38 quicker.  Two more Wanderers were amongst the prize-winners as Tom Glandfield (8th in 38:35) won in the 40-44 years age group and Bob Evans superb time of 44 minutes dead secured him victory among those aged 65 and over and 38th place.  The overall event was won by former Lewes rider Pete Morris (Team ASL) in 35 minutes and 29 seconds.