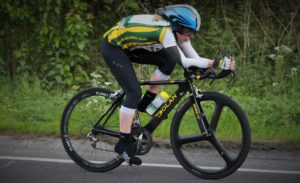 On Sunday 18th February the first of Eastbourne Rovers’ time-trials for 2018 took place on the 10 mile circuit up and down the A22 from East Hoathly to the Boship roundabout and back.  In what were sunny and quite mild conditions for the time of year two Lewes Wanderers were among the 23 riders to take part.  Neither of them featured near the top of the final standings, but for the first time in her relatively short racing career Kate Mankelow got the better of her father – John.  Kate’s time of 26 minutes and 17 seconds was some 27 seconds outside her personal best, but was good enough  for second fastest of the four female competitors and 15th overall, while John was three places behind in 26:36.  A week later in equally bright, but near freezing temperatures John was back in action in round 2.  The bitingly cold wind no doubt contributed to only 18 athletes taking to the start line and to John’s time of 28:22, which left him in 16th position.

A few miles to the west in the quiet lanes between Ringmer and Glynde a dozen of John’s club-mates congregated for the third and final round of the club’s Reg Porter Trophy.  As is customary the challenge was to ride two laps at as near to the designated speed as possible, crucially without the aid of a handlebar mounted cycle-computer of any kind, all of which were temporarily confiscated by the organisers before the contestants were sent on their way.  On this particular occasion the task was to complete a fairly flat loop of 2.34 miles at an average 14.5mph followed immediately by a 4.19 mile circuit to be ridden at 11.5mph, but with the added complexity that the route sent riders up towards the wind turbine and then plunging down the steep hill past Glyndebourne Opera House, making assessments as to average speed something of a lottery.  Going into the event four riders were in contention for the overall prize, but leader after two events Rob Pelham could do no better than 10th place – 1 minute and 22 seconds awry with his estimations, while joint second Micky Turner (1:15 out) and fourth placed James Geldart (1:11) placed 9th and 8th respectively.  All of which left the way open for the victor in Round 1 – Ian McGuckin – to claim the trophy, which he did in style by winning on the day; his first lap being just 3 seconds too fast and his second 24 seconds so for a total differential of just 27 seconds.  The finest piece of judgement on the day came from runner-up Dom Lowden who was but one second too fast in completing his second lap, but was 38 seconds too fast on his opening tour so 12 seconds behind Ian in the standings.