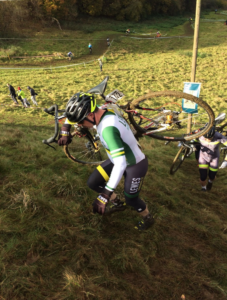 It was a bright and sunny day on Sunday 12th November for Round 8 of the Kinesis UK London and South East Cyclo-Cross League.  That said there was a biting northerly wind and steady rain the day before made an already technical course devised by promoting club Dulwich Paragon CC around the grounds of historic Leeds Castle in Kent into a treacherously muddy beast in places.

A trio of Lewes Wanderers crossed the county border to compete against 96 others in the race for men in their forties.  Rob Pelham made the best start and was running as high as 37th place at the end of the second lap when a deflated tyre brought his efforts to an end.  Going into the race Paget Cohen stood just 1 point and a single position ahead of good friend Darren Haynes in the series standings.  After one lap that situation looked certain to be reversed as Darren was in 49th position with Paget 24 places and almost a minute behind.  By the third lap the field had strung out as riders were able to settle into some sort of rhythm and had room to overtake where able and Darren's advantage over Paget across the finish line had stretched to 1:22, albeit Paget was now only 15 places behind.  Despite a fall while being lapped by the leaders Paget continued to make up ground during the last three laps and finished just under a minute and only 5 positions behind his 54th placed club-mate at the chequered flag.  In the following race for men aged 50 years and over Dom Lowden took his second start of the year among 46 others.  He narrowly failed to avoid being lapped by the eventual victor, but came home in a fine 18th place.