Darren Haynes was the only Lewes rider to venture all the way out to Ramsgate on Sunday 14th October in order to take part in Round 2 of the East Kent Cyclo Cross League in the grounds of Newington Community Primary School.

His race was going well until a tyre came off the rim not once, but twice in quick succession.  He ran his machine to the pit area where he had the luxury of a spare set of wheels waiting, but while he was thus able to finish the race his prospects of a good result were somewhat dashed.  He crossed the line one lap down on the victor in 31st position out of 41 racers in the category for men on their forties.

Richard Burchett was the only Lewes Wanderer to take part in Brighton Mitre Cycling Club’s 50th annual 25 mile time-trial On Sunday 21st October.  His time of 1 hour 4 minutes and 40 seconds placed him 29th of the 48 starters.

Later that morning Peter Baker and Nick Dwyer were among 162 men in the Road Time Trials Council National Closed Circuit Championship.  This event comprised five laps of the 2.356 mile long Thruxton motor racing circuit in Hampshire for a total distance of 11.8 miles.

Being a former airfield the course is relatively flat and should have a well-maintained surface, but the biggest bonus for the competitors was that they wouldn't have to worry about any other traffic.

Peter’s time of 26 minutes and 38 seconds granted him 98th place while Nick's 29:57 left him in 142nd, although there is a suspicion that he was accidentally timed over six laps rather then five. 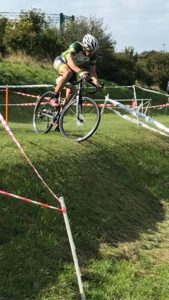 Round 6 of the Kinesis UK London and South East Cyclo Cross League promoted by Addiscombe CC took place at East Bysshe Cross Country Course near Lingfield that afternoon.  Dan Street and Paget Cohen were among 87 gentlemen in their forties to take the grid for a six lap race on terrain more normally used for exercising more thoroughbred four-legged athletes and utilising very different sorts of saddles.

Dan started 28th, slipped to 30th at the end of the first circuit, rose as high as 27th by mid-race before finishing in exactly the same position as he began.  Paget made a terrible start, losing 15 places on the first lap and on the second circuit he had a minor off when another rider forced his way past through one of the twisting wooded sections.

His race was incident free from then on and he was able to pick off a couple of riders each time around only to lose out on the sprint for 47th place by half a wheel.