Two Lewes Wanderers were among the entrants for the Sussex Nomads Hill Climb up the infamous Ditchling Beacon on the bright, but cold and damp morning of Sunday 28th October.  Richard Burchett just got the better of his club-mate Edward Tuckley as his time of 5 minutes and 49 seconds placed him in 39th of the 99 finishers, two-and-a half seconds and 6 positions ahead of Edward.

A host of Wanderers were otherwise engaged in Preston Park, Brighton that afternoon for Round 7 of the Kinesis UK London and South East Cyclo-Cross League incorporating Round 3 of the Sussex League.  The event promoted by Preston Park Youth CC was the first at this venue, but the organisers devised a fantastic course utilising the tarmac velodrome, grass infield, perimeter path and a wooded section of the adjacent public park.

Four of the Lewes riders were among 71 riders in the noonday race for men in their forties.  All incurred minor offs on the technical sections, but recovered with varying degrees of success.  Dan Street had the best grid slot and he made the most of it as he gained four places on the opening circuit and two more on each of the next two times round to end the six laps in a fine 19th place.

Paget Cohen, Rob Pelham and Darren Haynes had lined up alongside one another a couple of rows behind Dan, but while Paget held station on the frenetic first tour then made ground to place 32nd Rob and Darren got bottled up in the traffic and slipped to 52nd and 55th respectively at the flag. 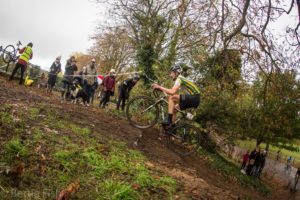 A passing shower enlivened the closing laps of that race and there was more to come for the following contest for men over 50 featuring Alan Lester and Stephen Burgess.  Stephen started just ahead of Alan and at the end of the first lap they were nose-to-tail in the middle of the 54-strong field. Alan found a way past on lap 2, but while he slipped a couple of places to 35 at the close Stephen couldn’t take advantage and fell to 40th and a lap behind.

After his victory last time he raced Patrick Hough was on the front row ahead of 56 men under 40 for the final race of the day on an increasingly greasy track.  Things didn’t go his way this time as he found himself back down in 8th place at the end of the first lap. He fought back to as high as 5th at the end of lap 3, but despite circulating consistently dropped back to 8th by the last of the 10 laps.