Such was the quality of the field assembled for the East Sussex Cyclists Association Hill Climb up Firle Beacon on the morning of Saturday 13th October that none of the riders from the local club could break into the top twenty.

Best of the nine Lewes Wanderers among the forty-eight riders to take to the start was 22nd placed Dan Street with a time of 4 minutes 55.9 seconds, just ahead of the reigning club hill-climb champion Aidan McConville in 24th with 4:59.9. 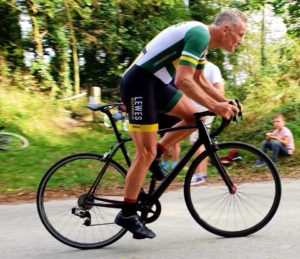 Richard also thought better of taking part in that afternoon’s Velopace Hill Climb up nearby Butts Brow although seven of his clubmates did complete the double-header.  Dan Street’s powers of recovery are clearly strong as he produced a storming time of 4 minutes 28.42 seconds to claim 12th place out of the 42 finishers.

Back on Sunday 7th October Peter Baker finished 12th out of 51 competitors in the Veteran Time Trial Association (London and Home Counties) 25 mile event thanks to his impressive time of 56 minutes and 51 seconds.