Lewes Wanderers annual Hill Climb took place on Monday 5th August.  Disappointingly only a dozen riders turned up to race up the fearsome slopes of Firle Beacon on what was a fine, but windy, evening, although it was still a well contested event.

On the evening of Wednesday 7th August father and daughter Nick and Anna Dwyer competed in the a3crg Buriton 10 on the A3 in Hampshire.  Nick finished 7th of the 50 male competitors in 20:02 while Anna’s time of 24:05 left her 10th of the 14 female entrants. 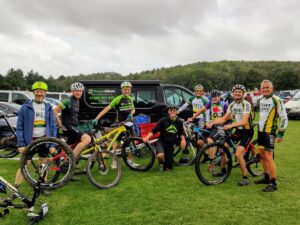 Saturday 10th August was the date for the annual Brighton “Big Dog” - a six hour mountain bike race around the steeply wooded slopes of Stanmer Park on the eastern outskirts of the city.

Just for once Lewes Wanderers had a sizeable representation with nine budding mud-pluggers assembled for the noonday start.  The event could be tackled solo, in pairs or in teams of three taking turns as and when necessary, and it was this third and final option that they lined up in.

Despite a yellow weather warning for the south coast the rain had dissipated and the gale force winds were barely perceptible in the shelter of the thick woodland, although there was a lot of tree debris littering the course.

The trio of Mark Frost, Duncan Fuller and Dom Lowden fared best finishing 12th out of the 23 teams of adult men having completed eight laps within the time limit.  Duncan shone in particular as all three of his laps were under 39 minutes. Despite gear selection issues on his third circuit Mark also managed a sub-40 tour while Dom contributed the other two laps.

Darren Haynes went over the handlebars coming out of a “bombhole” at the end of his team’s very first lap, but he picked himself up to complete that circuit plus one other.  Richard Frost survived two circuits without serious incident while Paget Cohen suffered a puncture on the third of his laps, but replaced the tube to bring the team’s total laps to seven within the time limit and give them 19th place.