The seventh of Lewes Wanderers’ 10 mile time-trials was held on the evening of Monday 18th June.  Rob Pelham won his second round of the series in a time of 22 minutes and 7 seconds ahead of Mark Frost in 22:25.  19th placed Sue Collett (27:30) won her first ever round while 7th placed Richard Burchett (24:22) was the only one of the 22 riders to set a personal best.

Mark Frost was back in action over the same distance the following night where he proved fastest of the 28 combatants in Brighton Excelsior’s version of the event with his time of 21:58.  Clubmate Paul Hanratty recorded 26:29.

On the evening of Wednesday 20th June husband and wife Brett and Lisa Davis journeyed into Hampshire as two of 74 riders to compete in an a3crg run 25 mile time-trial.  Brett finished a fine 22nd courtesy of his time of 53 minutes and 17 seconds, but Lisa eclipsed him and the club record over the distance as she reduced her own mark by 9 seconds to 58:01 in placing 56th and 3rd fastest female.

The third and decisive round of Lewes Wanderers’ Criterium races took place on the evening of Thursday 21st June.  Last year’s series winner John Cordner (trainSharp Club) dominated each of the three intermediate sprints, ably supported by clubmate Martin Markowski who was runner-up in the first and third.  Crucially, however, series leader going into the event Steve Kane (Team ASL) took second at the second sprint and third in the final one to pip John to the overall ‘Prime’ prize by 55 points to 51.

The host club’s Rob Rollings took third in the first sprint to give himself a shot at third place in that competition, but was denied by Crawley Wheelers’ Ryan Machin who popped up to take third in the second sprint and leave him fourth. 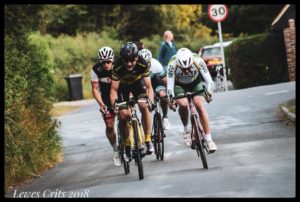 Going in to the fifth and final lap a group of four, including the home club’s Nick Dwyer, somehow got away from the bunch and with no team willing or able to chase them down the quartet were to contest the victory at the end of the 50 miles.  In the event Steve Coombs representing Sussex Revolution Velo Club won the sprint easily with Nigel Langridge (Crawley Wheelers) beating Robert Lovett (Bayeux Cycling Team) by a bike length to second with Nick taking fourth.

Nine seconds later Steve Coombs’ clubmate Chris Barker led the remaining riders over the line ahead of Cordner and Machin.  Steve Kane had already secured the overall title, but his 11th place gave him a 10 point cushion over Cordner at the top, with the winner of Round 2 - James Bullen (URDT) - having to settle for third.

Rob Rollings crossed the line in 9th to leave him 13th in the overall standings, while Nick moved up to 17th, ahead of clubmates Martin Baddeley (21st) and Dan Street (=25th).

On the same night three Wanderers ventured into West Sussex for a Worthing Excelsior CC 10 mile time-trial.  Rob Pelham (20:57) took third of the 18 competitors while Paul Fletcher (8th in 22:55) and Richard Burchett (11th in 23:31) each achieved massive personal bests.

In the Blazing Saddles 50 mile time-trial Nick Dwyer on the morning of Sunday 24th June Nick Dwyer took over two minutes off his own club record in finishing 10th out of 110 in a time of 1 hour, 43 minutes and 11 seconds.  In conjunction with 41st placed Brett Davis, who set a new personal best of 1:50:22 and 64th placed Peter Baker (1:55:33) the trio also took over six minutes off the club team record. The third club record was set by 74th placed Lisa Davis who reduced her own mark by over six minutes to 1:58:24 and was 6th of the 14 ladies racing.

At the Old Portlians 25 mile event Mark Frost finished a fine 4th out of 21 in a time of 57 minutes and 2 seconds.