Nineteen riders, including three guests, turned out for Round 3 of Lewes Wanderers’ summer series of thirteen time-trials on Monday 20th May.  It took a personal best by 27 seconds, but 3rd overall Richard Burchett proved fastest of the host clubs’ entrants with a time of 22 minutes and 39 seconds.

Two nights later saw the second of the four non-standard time-trials that Lewes run - the 12.46 mile Circuit of Laughton.  This event was switched last year from it’s traditional slot of an early March morning to a late May evening due to bad weather which proved so popular with the competitors that the change was made permanent.

2018 saw a swathe of personal bests due no doubt to the later scheduling and there was no shortage of such 12 months later.  One of the few who didn’t improve last year returned with a vengeance as Nick Dwyer not only finished ahead of Rob Rollings (2nd in 28:01) and Brett Davis (3rd, 28:11) this time around, but reduced Rob’s club course record by 46 seconds to 26 minutes and 47 seconds.

Behind 4th placed Mark Frost (28:50) there was a very close battle over 5th with all four riders setting new personal bests in their efforts.  Richard Burchett took a huge 1:58 off his mark in order to claim the place in 29:15, just 5 seconds ahead of Martin Baddeley who improved by 43 seconds.  7th placed Paul Fletcher (29:34) took 41 seconds off his mark and that was crucial as Dan Street (29:44) improved by a mere 25 seconds. 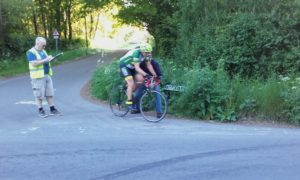 As last week Paul Hanratty was the lone Wanderer to contest the latest of Eastbourne Rovers’ 10 mile events the following night and his time of 27:55 placed him 23rd of the 25 entrants.

Jamie Lowden was the sole Wanderer brave enough to compete in the Beachy Head Classic on Sunday 26th May, a support race to the Women’s Tour of Sussex.  As if eight anti-clockwise laps of a circuit incorporating the climb of it’s title weren’t enough the furious pace and a strong wind whittled the field down from 75 starters to just 50 finishers with Jamie crossing the line in a strong 9th place.

Father and daughter Nick and Anna Dwyer carried their fine form through to the morning of Bank Holiday Monday when they both performed superbly in the Brighton Mitre 10s near Steyning. Nick finished 3rd overall in a swift 20:42 while Anna reduced her personal best by 9 seconds to 24:34 and in doing so secured the prize for fastest female.

Jamie Lowden somehow recovered from his exertions the day before to journey up to Shropshire the same day to participate in the Anfield CC 100.  In wet and windy conditions he showed admirable willpower to stop the watch after 3 hours 53 minutes and 52 seconds.