Round 4 of Lewes Wanderers’ series of 10-mile time-trials took place on Bank Holiday Monday 27th May.  In the unexplained absence of many of those who had thus far dominated previous rounds several others among the field of fourteen, including two guests, had the chance to shine.

Barely a week after having ridden from Land’s End to John O’Groats with his wife Christine Club Chairman Dom Lowden showed he still had some zip in the legs by claiming victory in a time of 23 minutes and 16 seconds.  Second fastest Wanderer, and third overall, was Gavin Richards in 24:28, ahead of Vince Busk (25:30) and Rich Streeter (25:57).

6th placed Kate Thomas (26:09) was fastest female while in 9th and 10th Bob Bone and David Wilkins rolled back the years to each reduce their personal bests by 10 seconds apiece to 27:56 and 28:04 respectively.

On the evening of Thursday 30th June Lewes rider Nick Dwyer was among the guest riders for a Worthing Excelsior 10-mile event on the A24 and he promptly rode off with first place among the 21 finishers in the lightning fast time of 20 minutes and 8 seconds.

Up at Gravesend Cyclopark the same evening Darren Haynes and Dan Street took part in Round 6 of their Summer Series of circuit races.  Darren crossed the line in 27th position, but a puncture put paid to Dan’s efforts. 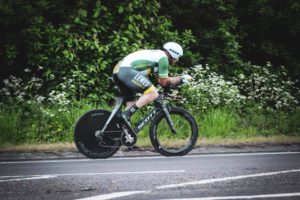 Nick, Gavin, Vince and Rich were among a quintet of Wanderers to head to East Anglia at the weekend for the various events falling under the banner of the Tour of Cambridgeshire.  Saturday 1st saw what was titled the “Chrono” – a 16.4 mile time-trial on closed roads south of Peterborough.

Once more Nick excelled as his time of 37 minutes and 1 second entitled him to 3rd place on the podium ahead of thirty-five men in the 55-59 age-group.  Vince Busk was tantalisingly close to repeating the feat, but his time of 44:29 left him 11 seconds shy and in 5th of the 13 men in the 65-69 age group.

Gavin and Vince were back in action for Sunday’s bunch races. Gavin finished an excellent 5th out of the 115 men in his age group and 41st overall in the 100-mile event “Gran Fondo” for those competing without a race license.  Vince had the misfortune of suffering two punctures in the 67 mile road race which left him 24th and last in his age-group, but 91st out of 94 overall.

By virtue of finishing in the top 25% in their respective categories Nick, Gavin and Sally each qualified for the UCI Gran Fondo World Championships to be held in Poznan, Poland later this summer with Vince sadly just missing out.

Also travelling in search of a fast time that day was Lewes man Brett Davis competing in the Portsmouth North End 25-mile time-trial a long way north of said city on the A3 near Haslemere.  It certainly paid off as he came away with a super-fast time of 52 minutes and 28 seconds.