On Sunday 10th March new Lewes Wanderers rider Joe Benians took part in Round 3 of the Sussex Cycle Racing League Closed Circuit series at Preston Park, Brighton where he finished a highly encouraging 6th out of 21 racers in his category.

Eleven Wanderers took part in the following Sunday’s East Sussex Cycling Association Hardriders time-trial.  The days immediately preceding the event had seen gale force winds and driving rain, but the morning dawned bright and sunny and with the wind reduced to just a strong westerly.

The weather would be the least of the combatants concerns though as it isn’t called the Hardriders for nothing.  From the start just south of the Bodle Street Green Village Hall headquarters the course is fast downhill towards Windmill Hill, but from there a sequence of stiff climbs begin. 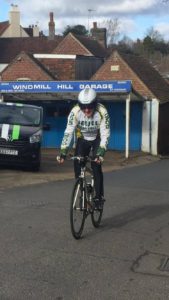 The following blast along the A271 through Boreham Street would probably have been the highlights for the riders as having turned north into the lanes they then faced a long and steep ascent to Woods Corner.  A fast descent to Earls Down led to a slow drag up to Three Cups, then a plunge to Rushlake Green before a “roller-coaster” run back to the finish, which this year would be somewhat short of the normal 15.06 mile route due to roadworks.

Best of the Lewes contingent on the day was Dan Street who covered the truncated 13.6 mile course in 38 minutes and 33 seconds for 11th place overall.  His nearest challenger was birthday-boy Richard Burchett in 18th with 40:10. Peter Baker (43:41) was 34th, just ahead of debutant Neil Gearing (44:46) in 38th, while Richard Frost and Kathryn Gohl tied for 41st with identical times of 47:06; Kathryn being 6th of the seven female entrants.