The Easter weekend saw cycle racing resume after a long hibernation and the first of Lewes Wanderers’ planned time-trials for the 2021 - the Circuit of Danehill on Easter Sunday.  It wasn’t entirely back to normal though as restrictions denied the competitors the luxury of a village hall sign on and post-race cuppa and there would be no hefty shove to send them on their way.

Given that it was a raw, grey April morning with a biting northerly wind it was hardly surprising that only fifteen hardy souls signed on in the car park and set off on this 18.11 test against the watch.

Fast times would be at a premium in such conditions, but one man who resolutely defied such logic was Joe Benians who scorched round the course in 44 minutes and 35 seconds to beat his personal best by over 4 minutes and all other entrants by over 90 seconds. 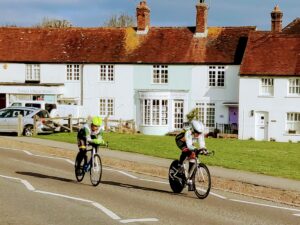 The long weekend of racing actually kicked-off on Good Friday with two Wanderers competing in Crawley Wheelers gruelling “Sporting” TT over a full 41.69 miles and in very similar conditions.  Paul Fletcher (racing for trainSharp) posted a strong time of 1 hour 44  minutes and 30 seconds to place 21st, while Darren Haynes placed 61st of the 63 finishers in 2:21:58.

That same morning Joss Lowden (racing for Drops - Le Col s/b Tempur) showed her class in the first of the Merlin Cycles Classic Series promoted by Birkenhead North End CC.  She covered the 22 mile course south-east of Chester in 46 minutes and 40 seconds to beat her nearest female competitor by over 4 minutes and finish second overall, just 26 seconds behind the fastest man.

The weekend also saw the annual Brighton Mitre “hilly” time-trials with the 10 mile event on the Saturday and the 25 on Easter Monday with several Lewes riders involved.  Over the shorter distance Lisa Davis (Drag2Zero) proved 5th female overall and 3rd among over 40s thanks to her time of 27:32 while her husband Brett (trainSharp) was 14th from 45 finishers in 24:55.