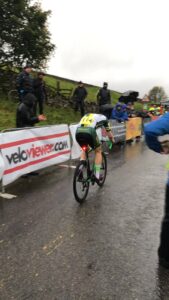 Following his fine performances in the local hill climb scene Joe Benians was granted an invitation to the National Hill Climb Championships on Sunday 31st October.  These were held up Winnats Pass in the Derbyshire section of the Peak District west of Sheffield.

The Pass had hosted the National Championship 10 times previously, but not since 1977 and the promoters Rutland CC and myHillcycling.co.uk had arranged for the road to be closed for the event.  This was just as well as the climb of 985 yards length averages 16%, has maximum gradient of 23% and it was wet on the day.

In something of a contrast Dominic Lowden (Diss CC) competed in a Diss CC hill climb  in Norfolk on Sunday 24th October.  He covered the toughest hill they could find in 44.78 seconds to place 4th of 12 competitors.

That same day back in Kent Darren Haynes was the lone Wanderer to head east to compete in Round 2 of the East Kent Cyclo Cross League.  In an event held in the grounds of Northbourne Park School he finished a fine 13th from 40 in the race for men over 50.