On Saturday 21st August Simon Head took an excellent 3rd place from 18 racers in Round 4 of the South East Road Racing League held at the Cyclopark near Gravesend.  He was unable to return the following Saturday for Round 5, but Richard Burchett placed 13th out of 25 for another encouraging result. 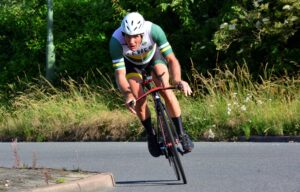 On the evening of Tuesday 24th Dom Lowden finished 3rd out of 11 in a Diss CC 10 mile time-trial in Norfolk in a time of 22 minutes and 42 seconds.  He raced again on Sunday 29th August, but this time over 11 miles and on a looser surface in the Fenland Flyer Go-MTB Gravel event forming part of the Mildenhall Cycling Club mini-fest.  His time of 36 minutes and 11 seconds, placing him 6th from 30 entrants.

Up in Cheshire that same morning Sally Turner (trainSharp) was a superb 4th overall and 1st female over 40 years of age in the Cycling Time Trials National 50-mile Championship (promoted by Congleton CC) in a time of 1 hour 58 minutes and 52 seconds.

That same day on a remote hillside east of Maidstone in Kent Roger Hutchings (East Grinstead CC) crossed the line after only 4 minutes 51.6 seconds of intense effort as he finished 3rd of 5 in a Medway Velo hill climb up Hollingbourne Hill.

The previous day on rolling roads near Plaistow (West Sussex) Paul Fletcher (trainSharp) took a strong 7th place from 27 athletes in a Sussex Cyclists’ Association 10-miler which he covered in a time of 24:14.