Sunday 28th January saw the revival after a fallow year of Lewes Wanderers' annual Reliability Trial.  New event organiser Jon Collett devised a challenging 55 mile clockwise loop that the entrants were required to complete in either four-and-a-quarter, three-and-three-quarter or three-and-a-quarter hours depending upon how confident they were in their ability to follow a set course, their fitness, the roadworthiness of their bikes and their talents for dealing with the unexpected.  From the East Hoathly Village Hall headquarters the riders would warm up with the relatively gentle drag up to Cross-in-Hand and through Heathfield High Street.  The following 18 miles however would prove far more testing as the combatants would have to deal with a succession of some of the steepest ramps and descents that this quiet corner of Sussex can offer as they would head north towards Mayfield, then turn east to Burwash and south via Brightling to Catsfield.  From wooded slopes dotted with clues to the county’s history of iron production from here on the survivors would be treated to another side of this most delightfully varied part of the world.  From the halfway point at Ninfield they would continue south-west through Hooe, cut across their first taste of lowlands to Wartling, then across the Pevensey Levels down to the edge of the town of the same name before turning west back to Hailsham.  Once safely across the A22 for the first time the last leg, as it were, would be run on lanes highly familiar to any regulars on the club’s Sunday social rides as it would take them through the charming villages of Chalvington and Ripe before spending the last five miles returning to where they started, hopefully within their own self-imposed time-limit. 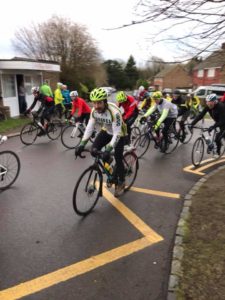 Conditions on the day were mild, dry and cloudy, but rain overnight and in the preceding days had left many of lanes littered with mud and debris and in places on the levels underwater, on top of the dreaded potholes.  43 riders entered in advance with a further 12 signing up on the line and they were set off in groups according to their target times.  First off were those attempting to meet the most generous time limit; 19 of which had pre-entered, of whom 15 were from the host club, although only 8 of those finished within four-and-a-quarter hours.  In the intermediate group of 28 pre-entries there were 8 Wanderers, with 6 of them making the cut.  Only half-a-dozen riders set off with the aim of completing the course in the shortest time, four of them representing Lewes, but a combination of punctures, some multiple, and mechanicals meant that only new Club Chairman Dom Lowden and club-mate Lazlo Suppel managed to get round in time.