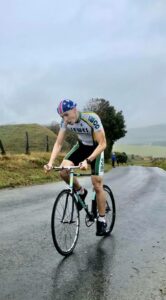 The hill-climb season really took off over the weekend of the 12th and 13th October with events on both morning and afternoon of both days and Lewes Wanderers involved in all of them.

The weekend had kicked off with the East Sussex Cycling Association event up Firle Bostal, the same climb as used by Lewes for their own championship.  On a mild, but drizzly morning, making traction a distinct issue Richard Burchett fared best as he finished 25th out of the 45 finishers in 5 minutes 13.6 seconds.  Just five places back was Ed Tuckley in 5:27.9 with Peter Kilby a further four positions behind in 5:46 dead.

Roger Hutchings was 42nd in 7:11.5 while Lewes Wanderer Sally Turner (racing for trainSharp) stopped the watch in precisely 6 minutes for 38th overall and second fastest female.  Club-mate Lisa Davis (also trainSharp) was 43rd and 5th quickest female in 7:15.6, but that did include a 1 minute late start.

Saturday afternoon Beachy Head Cycling Club hosted their version up the Butts Brow ascent out of Willingdon.  Ed Tuckley (25th in 5:20.7) and Peter Kilby (30th in 5:39.9) were back for more punishment, but they were, perhaps unsurprisingly, bested by the relatively fresh Paul Fletcher who claimed 20th place from the 43 finishers in 5:02.8.

Sunday saw the traditional Catford and Bec double-header and thankfully no more rain, although the tree-lined slopes were still slippery.  A quartet of Wanderers were among 128 competitors willing to subject themselves to such torture as the 25% inclines of Yorks Hill west of Sevenoaks for the morning’s Catford CC event.  Best of the bunch was undoubtedly Jamie Lowden who roared up the slope in 1 minute 59.7 seconds to claim 6th place. Richard Burchett was next best in 2:39.1 for 69th ahead of Jamie’s father Dom (2:56.5 and 94th) and Roger Hutchings (4:00.3, 126th).

Father and son were back in action after lunch for the Bec CC event up White Lane, Titsey.  Jamie displayed enviable powers of recovery as he again ducked under 2 minutes and gained a single place upgrade in the process; his time of 1:56.9 granting him 5th.  Dom was just point seven of a second outside of 3 minutes to finish 79th from the 88 starters.

Darren Haynes was the sole Lewes Wanderer to journey up to Herne Hill Velodrome for Round 6 of the Kinesis UK London and South East Cyclo Cross League.  A tricky technical course featuring steps, hurdles and a precipitous bank was made even tougher by rain making much of mud sections somehow simultaneously sticky and slippery.  Darren had to pause on the second of five laps as his front wheel had worked loose, but he continued to cross the line in 40th from the 79 starters.