Round 8 of Lewes Wanderers’ 10 mile time trials was held on the hot and sticky evening of Monday 19th June.  31 athletes competed, of whom 23 were from the host club.  Just for once Brett Davis (21:31), Callum Middleton (21:38) and Sean Quinney (21:42) got the better of series leader Tom Glandfield (21:56) only for Nick Dwyer to return and scoop his 2nd victory of the season in 21:11.  The 2nd, 3rd and 4th placed riders at least all had the consolation of setting new personal bests, Brett and Sean beating 22 minutes for the first time.  Also setting PBs were 10th placed Darren Haynes (23:40) and, for the fourth week in a row, Rich Streeter, whose 25:32 left him 21st.  8th placed former Wanderer Joscelin Lowden (Aprire/HSS Hire) returned to reduce her own ladies course record by four seconds to 22:31.  With four rounds remaining 15 riders now have the requisite 6 rides to count for the overall with Tom still leading, but Brett is within striking distance and Nick, Callum and Sean are still all in contention.

Tom was back in action on Wednesday evening, but over 25 miles in an a3crg promoted event near Horsham.  His fine time of 51 minutes and 53 seconds was only good enough for 12th place such was the quality of the opposition.  Meanwhile club-mate Alan Lester was pounding round the Preston Park Velodrome in Hove successfully collecting 6th place in a group handicap race and 7th in a 3 lap sprint under the auspices of the Sussex Cycle Racing League sponsored by True Wheels. 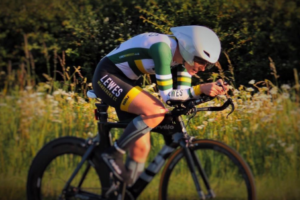 21 riders, all except one from the host club, took to the start line on the equally sticky evening of Thursday 22nd June for Lewes Wanderers’ Circuit of Earwig time-trial.  Former Wanderer Pete Morris (ASL-360) took the spoils with a new personal best and course record of 37 minutes and 33 seconds.  Given that the good conditions and that this is only the third year that this revised version of the 17.40 mile course has been used a slew of personal bests were always on the cards and nine arrived.  15th placed Lisa Davis (45:14) reduced her own course record by over 5 minutes and retained the ladies title unopposed.  Gents winner was Callum Middleton (39:35), ahead of equal second Brett Davis and Nick Dwyer (39:59).  Callum and Brett both set new marks as did the riders finishing 7th to 9th - Dan Street (41:54), Gavin Richards (42:08) and Micky Turner (42:48) – while also showing improvement were Martin Baddeley (11th, 43:38), Darren Haynes (14th, 44:34) and Vince Busk (16th, 46:04).

The temperature had dropped a few degrees come the weekend, but the pace hardly slackened.  For the second time in a week rising talent Callum Middleton got the better of Tom Glandfield, this time in Saturday morning’s Horsham Cycling Open 10 and it took another personal best to do so.  Callum’s new mark of 21 minutes and 28 seconds beat Tom by just one second and, unsurprisingly, one place as they claimed 12 and 13th of the 76 finishers.  Behind them Peter Baker put in a solid 23:22 and Tamar Vanderhaas a 24:22 to place 4th of nine female entrants.  That afternoon Nick Dwyer was just one of 118 riders bolting along the A11 near Newmarket in the Zak Carr Memorial 25, promoted by Api-Metrow.  Nick’s time of 53 minutes and 23 seconds placed him a fine 20th.

It is perhaps to be expected, but conditions were far from ideal for the Sussex…