The onset of autumn traditionally sees not just a change in the weather, but a change in the cycling calendar and that was illustrated by the racing activities undertaken by Lewes Wanderers over the weekend of 16th and 17th September.  One man still testing himself against the watch is Nick Dwyer and he went as far as the A3 near Petersfield, Hampshire on Saturday to take part in a Paceline RT run 10 mile time-trial.  Such was the quality of the 120 rider strong field that Nick’s phenomenal time of 19 minutes and 38 seconds, at an average speed of over 30mph, left him over a minute behind the winner and outside of the top 20 in 24th of the 91 male finishers. 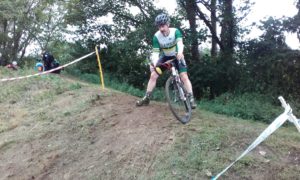 Round 2 of the Kinesis London and South East Cyclo Cross League on Sunday 17th was promoted by London Phoenix and Brixton Cycles in and around the historic, but recently revamped, Herne Hill Velodrome. Two Wanderers made the trip to south London.  Darren Haynes had the misfortune to incur a puncture on the warm-up lap just as a sharp shower added an extra level of difficulty to a technical course already cut up by the earlier children’s races.  At least he had a spare set of wheels in the pits so was able to make the start.  His club-mate Paget Cohen befell the same fate early on the second lap and without any spares was resigned to joining the ranks of the many spectators for the remainder of the event.  Darren suffered a fall and a cut knee when riding up a steep earth bank that formed part of the course and the two riders ahead of him attempting the same ran out of traction and came off leaving him nowhere to go, but he remounted to finish safely mid-pack.

Even further afield, in the southern French Alps to be a bit more precise, Dom Lowden took part in the Grimpee du Col de Tourniol.  ‘Grimpee’ roughly translates as climb and this was a rather considerable climb of 7.2 miles up the aforementioned Col which averages 6%, but is frequently steeper.    Dom’s time of 38 minutes and 11 seconds left him some way behind the winner, but 37th out of 111 overall and fastest in his age group by 9 minutes.