The first of the four non-standard time-trials that Lewes Wanderers plan to run in 2021 took place on the evening of Thursday 20th May.  The event was in doubt due to forecast gail-force winds and possible showers, but the decision was made that it was safe and a dozen plucky riders took to the start up Shortgate Lane in Laughton.

Some were possibly regretting that decision as shortly afterwards they turned left to ride into the teeth of the gail down The Broyle, but they could at least recover and enjoy more of a tailwind on the leg back to Laughton which they would likewise tackle twice in covering the whole 12.46 mile course.

Fastest on the night, and smashing his personal best by over 3 minutes in the process was Joe Benians who stopped the watches after 27 minutes and 47 seconds of effort.  The only other rider to break the half-hour, and also setting a PB in doing so was Paul Fletcher (trainSharp) who clocked 29 minutes dead.

Peter Baker was back in action on Saturday 22nd May as Kingston Wheelers CC hosted a 10-mile TT on the A24 south of Dorking.  His slightly earlier start time was perhaps the reason for part of his advantage over clubmate Darren Haynes as Peter finished 31st of 55 in 24:11, while Darren rode through rain on the return leg to post 24:41 and claim 37th. 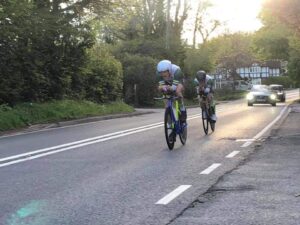 Joe Benians was back on the TT-rig the following morning as he and Rob Rollings teamed up to compete in the Sussex Cyclists’ Association 25-mile 2-up event near Steyning.  The dynamic duo powered round the rolling West Sussex course in 1 hour 2 minutes and 20 seconds to finish in an impressive 7th place from 24 pairs.  Fellow Wanderer Brett Davis along with Howard Shaw (trainSharp) came 4th in 1:01:34.

Joe and Rob rehearsed for the event by racing in the Southborough & District Wheelers 2-up on Thursday 13th May when they covered the 11.5mile course from Frant to Mayfield and back in 25 minutes and 9 seconds to place 2nd of the 10 pairs to take part.

Also on Sunday 23rd and over near Stonehenge Anya Tamplin (Hunt Bike Wheels) finished a highly creditable 25th from 41 finishers in the Critterne Road Race over 43 miles and against a very strong field.