Joe Benians continued his sparkling spring form with victory in a Southborough and District Wheelers run time-trial on the evening of Thursday 29th April.  He covered the 9.8 mile rolling course from Frant to Mayfield and back in 26 minutes and 16 seconds to triumph by over a minute.   Andrew Booty (S&DW) was 18th of the 19 competitors in 35:18.  On the same evening Peter Baker came 9th out of 12 entrants in an Eastbourne Rovers’ 10-mile event on the A22 with his time of 25:18.

Another rider showing terrific form is Sally Turner (trainSharp) who triumphed in the Sussex Cyclists Association 10 miler on the morning of Saturday 1st May.  Her time of 22:30 was even good enough for 19th overall from the 75 finishers.  Lisa Davis (Drag2Zero) 24:26 was 40th overall and runner-up amongst the 14 females to complete the A283-based course.  Lisa’s husband Brett (trainSharp) was 3rd overall in a fine 20:44, 12 seconds and 3 places ahead of Nick Dwyer.

Sally repeated her feat the following morning over 25 miles.  Her time of 58 minutes and 24 seconds made her the only one of the eight female racers to beat the hour.  Mark Frost was 39th out of 65 overall in 1:01:47. 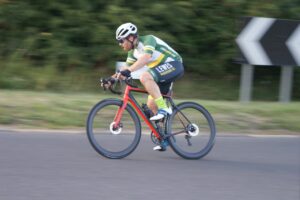 A quintet of Lewes Wanderers headed west on the evening of Tuesday 4th May to enjoy 5 traffic-free laps of the historic Goodwood Motor Circuit.  In this time-trial organised by a3crg Brett Davis fared best with his time of 25:12 granting him 5th out of 54 of those on TT-bikes.  His trainSharp comrade Paul Fletcher was 27th with 27:03, two places and 13 seconds ahead of Dan Street.  Richard Burchett (27:53) came 34th.  In the road-bike category Guy Brown finished 11th out of 24 in 30:08.

Slightly nearer to home on the same night Duncan Fuller posted 22:09 in Worthing Excelsior’s 10-mile road-based TT to finish 6th out of 18 riders, with 3 subsequently disqualified.

Young and old were down at Preston Park in Brighton the following evening for Round 1 of The Sussex Cycle Racing League Friday Closed Circuits.  Young Anya Tamplin (Hunt Bike Wheels) performed brilliantly to win all three of her events, while Peter Baker found the pace a bit hot for his liking and was outside the top 10 in each of his races.

The weather had taken a distinct turn for the worse the following morning, with strong winds and driving rain.  Notwithstanding Richard Burchett made a highly encouraging debut in Round 2 of the Ardingly Circuit Races.  He lost touch with the leading group, but won the 5-up sprint from the next bunch to claim 9th place overall.

Whilst over in Surrey Darren Haynes was ploughing up-and-down the A24 near Dorking in a Redmon CC 10-mile time trial.  His time of 26:12 placed him 26th out of 33 for those riding TT-rigs, while Adrian Hills (Eastbourne Rovers) was 5th in the hub-gear category in 43:14.