The morning of Sunday 19th November saw the annual running of the East Sussex Cycling Association Reliability Trial.  For those not acquainted with such things a reliability trial is a team event involving riders completing a pre-defined course within a set time limit, with the winning team being that to get the most riders round within permitted tolerances.  Responsibility for organising this event goes in alphabetical order among the ESCA affiliated clubs and for 2017 it was the turn of Brighton Excelsior Cycling Club.  They had devised a highly scenic 50 mile tour of the West Sussex lanes starting and finishing in Upper Beeding and to be completed in either three, three-and-a-half or four hours depending upon the entrants choosing.  Perhaps it was the distance just to get to the event or maybe the typically chilly weather for the time of year, but Lewes Wanderers had little chance of regaining the Rally Shield last won in 2013 when up against 47 entrants from the holders Eastbourne Rovers CC and 36 from the host club.  That said a quarter of the Wanderers who committed to ride rode rather than drove to sign on therefore subjecting themselves to a 100 miles or more in some cases. 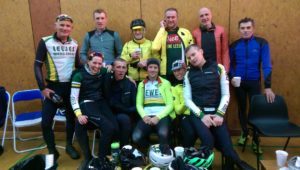 On the day three Wanderers did not start so only thirteen set off on a clockwise loop initially heading north through Steyning, Dial Post, the intriguingly-named Dragons Green and Barns Green to the first checkpoint after 20 miles just south of Rudgwick.  From here the course turned south-west via Wisborough Green, Fittleworth, Coldwaltham and to the second control at Greatham Bridge.  From this crossing of the River Arun there would be but 15 generally easterly miles back to the Adur, albeit with Storrington High Street to negotiate and the A24 still to cross.  Of the four Lewes riders attempting to finish within three hours a couple mistook it for a race and disqualified themselves by checking in too early.  Peter Price found himself the only Wanderer signed up to complete the course within the most generous time limit, but he found himself some new friends among East Grinstead CC to ride with and easily made the cut.  The magnificent seven in the intermediate group endured three punctures, two to the unfortunate Geoff Letts who despite assistance from his club-mates narrowly failed to finish in time.  The third was incurred by Lisa Davis, but thankfully she still had the company of friendly faces both to help replace the tube and to race to beat the cut off time.  As expected Eastbourne retained the trophy for the fourth consecutive year thanks to an impressive 41 riders proving reliable, Lewes were joint fourth alongside East Grinstead with 10 riders each counting.

At about the same time that those riders were rolling to a halt, dismounting and going in search of a well earnt hot drink and some cake Paget Cohen was gearing up for Round 9 of the Kinesis UK London and South East Cyclo Cross League up at Cyclopark, Gravesend and promoted by CC Cyclopark.  While it was by now a beautifully sunny autumnal day steady rain the day before had rendered many of the earth banks on the course, due to be used for Round 4 of the National Championships next Sunday, unrideable; indeed Paget slid off four times on his practice lap as he sought to find the limits of adhesion.  Once the whistle blew to start the competitors on their way in 6 lap the race for 40-something men he decided dismounting and wheeling or carrying his bike through those sections to be safest and sometimes quickest option and he successfully remained upright to be the 57th of the 82 racers to see the chequered flag.