It should come as little surprise given her time-trial victories throughout the year, but Lewes Wanderers' Lisa Davis has clinched three Sussex Cyclists' Association (SCA) titles for season long success.

Following the SCA Sporting 10 and 25 mile events at the end of August she found herself unassailable in the Long Distance Female Best All-Rounder (BAR) based upon average speed in the SCA 25, 50 and 100 mile events with an average of 23.517mph.

She also triumphed in the Points Competition for ladies, based upon the same eight SCA events from 10 to 100 miles, but with 10 points awarded to the winner of each event, 9 to the runner-up and 8 to third place, etc, with a near perfect score of 49 out of 50 from the five events she contested.

Her third win came in the SPOCO (Sporting Courses) competition where points are awarded to the winner of each of the seven short (10-15mile) seven medium (20-30mile) and six long (more than 40 miles) time-trials, the overall winner being the calculated on the sum of the best results from each distance category.

The weekend of the 15th and 16th September saw an East Sussex Cyclists’ Association double-header with a 10 mile time-trial on the Saturday morning and a 25 mile event 24 hours later.

Lisa Davis (24:46 and 26th) had to settle for runners-up spot among the six female racers, but only behind good friend and former-Wanderer Joscelin Lowden (Storey Racing).  Sue Collett (27:10) was 5th fastest female and 36th of the 40 finishers. 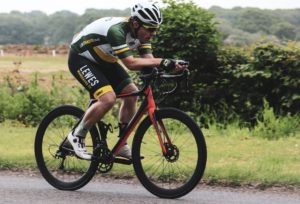 In Sunday’s 25 miler Kate Mankelow matched Lisa’s result as her time of 1 hour 7 minutes and 36 seconds earnt her runners-up spot amongst the four female competitors with Sue Collett (1:08:23) in third at her first attempt at the distance.

In the Southdown Velo 25 postponed from the August Bank Holiday weekend due to roadworks on the A27 course from Arundel to Chichester Peter Baker put in one of his best rides over the distance as he recorded a time of 57 minutes and 37 seconds which was good enough for 10th place.

In southern France that same morning Dom Lowden was placed second in the Grimpee du Tourniol, a 7 mile hill-climb up a col used in the 1987 Tour de France that averages 6%.  His time of slightly less than 40 minutes was actually quickest, but he received a 5-and-a-half minute penalty for not having a helmet, something not required in previous years.

Paget Cohen was the only Lewes rider to compete in Round 2 of the Kinesis UK London and South East Cyclo Cross League promoted by London Phoenix and held at Crystal Palace Park also on Sunday.  After a nervy first lap when he had a slow speed off on a steep bank he lay 73rd of 96 starters. After that he got into a rhythm and rose steadily to 46th place at the chequered flag.

Circuit of Danehill and TT round-up