The hill-climb season started to heat up over the weekend of 29th and 30th September, beginning with the Sussex Cyclists’ Association event on the Saturday morning.  Nineteen riders including Lewes Wanderer Aidan McConville tackled the fearsome Steyning Bostal ascent which ramps up to near 17% near it’s summit at the top of the South Downs.  Aidan’s time of 5 minutes 8 point 5 seconds placed gave him a strong 8th place. 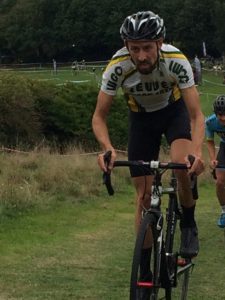 Round 4 of the Kinesis UK London and South East Cyclo Cross League promoted by Preston Park Youth CC was held at the new venue of East Brighton Park on Sunday 30th.  Eight Lewes Wanderers took part in the various races on a warm and sunny afternoon and there was no shortage of success.

Following his 6th place in Round 1 Patrick Hough dominated the race for men under 40.  Starting 30th of the 59 racers he somehow carved his way through to second by the end of the opening circuit.  Never lower than 3rd, he forged to the front on the fourth lap of nine, stretched his lead with every lap and celebrated victory a full minute clear of the field.

In the preceding race for men over 50 Alan Lester, starting to the rear of the 55 strong field, made a cracking start.  He overtook 23 riders including club-mate Stephen Burgess on the first lap to be right on team-mate Dom Lowden’s rear wheel.  At the end of the five lap race he crossed the line in 24th place, less than half-a-minute and only three positions behind Dom, while Stephen remained on the same lap to finish 40th.

After his good results in his first two races Dan Street started in 18th place on the grid of 78 men in their forties with Darren Haynes, Rob Pelham and Paget Cohen in close proximity to one another a couple of rows behind.  Dan gained a couple of places on the opening lap, slipped back to 19th on the fourth of the six lap race, but recovered to 17th at the line.

While Darren and Rob made clean starts, Rob gaining 17 places on the opening circuit and Darren six, Paget was delayed avoiding a couple of heavy crashes and lost a couple of spots.

By the third circuit however Paget had caught the tail of the large group his fellow Wanderers were in and one stupendous lap saw him pass eighteen riders including both of his club-mates.  Progress after that was less prolific, but Paget saw the chequered flag in a personal best 26th place, with Rob a minute or so back in 34th and Darren a lap down in 40th.

On a rolling 30 mile course near Saffron Walden Peter Baker recorded a time of 1 hour 14 minutes and 27 seconds to finish 19th of the 35 competitors in a Lea Valley CC promoted time-trial that same day.