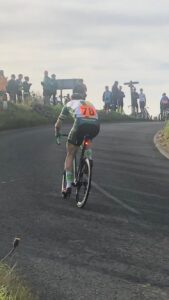 Dom Lowden took part in Round 5 of the Eastern Cyclo-Cross League, the West Suffolk Cross on Saturday 6th November.  The event was held at West Stow Country Park north of Bury St Edmunds and promoted by West Suffolk Wheelers.  He finished 8th from the 15 men over 60, on the same lap as the winner and 59th from 79 men over 50.

The following morning Joe Benians was the only Lewes Wanderer taking advantage of the Sussex Nomads CC having gained permission to temporarily close the slopes of Ditchling Beacon while they ran their annual hill climb.  Joe’s time of 4 minutes 50.4 seconds placed him 12th from 31 men overall and 6th of the 16 men under 30.

Round 7 of the Challenge Tyres London and South East Cyclo Cross League promoted by “The McGhee Allstars” took place at Gravesend Cyclopark later that sunny day.  In the race for men over 50 Darren Haynes got caught up in a few incidents on the opening lap and fell from 43rd on the grid to 51st.  Once he was free to ride he put in three quick laps, the third over 2 minutes faster than the first time around and rose back to 42nd from 71 finishers at the flag.

There was an impressive turnout of 43 women for the following race, among them Mugs Gohl (Nice Brew Racing). Like Darren she was delayed on her first lap and dropped one place from 16th on the grid, but she too got into a rhythm to post three consistent laps to recover back to 16th at the finish and 4th of the 18 women under 30.

In the race for men in their forties Dan Street was 30th at the end of the first circuit, but proceeded to put in four super-fast laps to rise to 28th from 82 at the line.