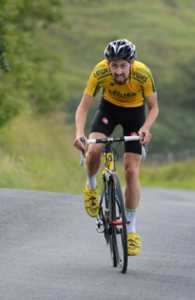 Alan Lester was Lewes Wanderers lone representative having one last try at proving himself around the open air track in the Brighton suburbs. He claimed a fine 4th in a 3 lap dash race; 5th in a distance race and 8th in the scratch. Alan only competed in half of the 18 rounds, but his cumulative results were good enough for 15th place in the overall standings.

The following evening it was again a case of a single Wanderer against the rest, but despite being outnumbered by 13 to 1 Patrick Hough rose, almost literally, above the opposition to claim victory. The event was Eastbourne Rovers Cycle Club’s inaugural hill climb up the fearsome 1,433yard Firle Bostal. This is the same climb used by Lewes for their annual test in this discipline, in which Patrick holds the course record with a time of 4 minutes 5.1 seconds. Well he now holds the course record for the ERCC event too as he triumphed over 11 Rovers and two other guests by a huge margin of over 30 seconds thanks to his time of 4 minutes 15.3 seconds.

Equipped with a pair of new wheels and blessed with cool bright weather Peter Baker proved that it’s never too late to make improvements when setting a new personal best on the morning of Sunday 20th August. His time of 56 minutes and 29 seconds was over 30 seconds faster than his previous best mark set in 2014 and gave him 13th place of 71 finishers in the Bec CC 25 mile time-trial near Horsham; club-mate Michael Valks was one of four non-finishers.