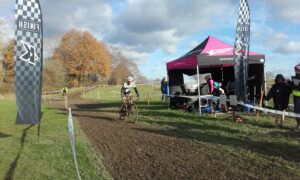 Dan Street clinched the Lewes Wanderers Cyclo-Cross Trophy for 2019-2020 following the fourth and final round of The Sussex Cyclo-Cross League at Bodiam on Sunday 1st December.  He had actually secured the title before taking to the start line shortly before noon as his closest challenger Darren Haynes was unable to compete, but he underlined his supremacy with another strong showing.

The event, promoted by the Rotor Race Team, also doubled-up as Round 10 of the Kinesis UK London and South East Cyclo-Cross League and the new venue at The Hub, Quarry Farm proved challenging, but highly enjoyable.  Being a farm, and following a week of considerable precipitation, the course was decidedly muddy in places and that would have a distinct influence on the results.

In the race for men in their forties Dan was 24th at the end of the first circuit, but forged through to 18th the following time round.  After being involved in a close battle for the following three laps he unfortunately slipped his chain twice on the final circuit and crossed the line in 21st overall; 6th amongst those qualifying for the Sussex League.

Clubmate Paget Cohen found himself in 53rd out of the 67 starters in the same race as he crossed the line at the end of the first tour, but making use of his climbing prowess and the steep gravel ascent at the far end of the course he rose to 45th the next time around and 37th by the chequered flag, albeit a lap down on the leaders.

In the following race for men over 60 Dom Lowden also had trouble keeping his chain on in the gloopy morass, but he established himself in second position among the five men over 60 in the 47-strong field and held that to the flag, even if he was a lap down.

In the final race for men under 30 Joe Benians began with two impressive laps, only for he too to drop his chain and unfortunately, being unable to re-engage it, his race was run.

With 285 points out of a possible 400, based upon results in all four of the Sussex League rounds, Dan claimed the club trophy for the first time in its three year existence.  Dom’s fine runners-up spot in the last round enabled him to leapfrog Darren to the same place in the club standings with 175 points to Darren’s 156.

The Sussex League standings were based upon the best three results from the four rounds, but again Dan Street achieved the best result.  Dropping his 9th place from Round 3, his super-consistent collection of a 5th, 7th and 6th placings amounted to 241 points and 6th overall amongst men in their forties.  Darren Haynes scored 193 for 14th, one place and five points ahead of Paget Cohen. Richard Frost was 52nd with 45 points from one participation.

Dom Lowden led the way for Lewes among men over 50 in 16th place with 186 points from three events, ahead of Stephen Burgess in 32nd with 115 from two events and Alan Lester in 39th with 54 from one.  Under 40s Patrick Hough and Joe Benians only accrued one finish each with Patrick’s 86 points leaving him 22nd and Joe’s 67 points 28th.