The 11th round of the Kinesis UK London and South East Cyclo Cross League took place on Saturday 21st December at Somerhill School, Tonbridge and was promoted by Southborough and District Wheelers.  Distractions of the festive season not to mention considerable rain in the days running up to the event no doubt contributed to only 49 competitors taking to the start line for the race for men in their forties just before midday. 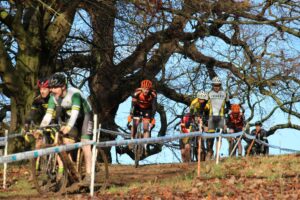 Darren Haynes and Dan Street courtesy of The Cycling Widow

Two of those were Dan Street and Darren Haynes representing Lewes Wanderers.  Both faired well in the slippery mud gaining a couple of places from their grid positions on the opening lap.  Dan’s lap of 10 minutes and 57 seconds left him in 26th place with Darren 50 seconds behind in 38th.

Each of them put in their fastest laps of the race the second time around with Darren’s lap of 10:09 seeing him rise to 36th, while Dan recorded the only lap either of them managed under 9 minutes with his 8:53 enabling him to improve to 22nd.

The combination of an increasingly boggy course, a sharp downpour and cumulative fatigue caused each of them to get progressively slower on the following circuits, but both continued to make progress as others found the going even tougher or saw their efforts come to a halt.

Dan was up to 19th position by the end of lap 3, held station over the course of the next circuit and gained one further place on the 5th and final lap to pass the chequered flag in 18th.  Darren maintained his position on the third circuit at the end of which he was lapped by the leaders thus finishing a lap down, but in 35th place.