'Round 9 of the Kinesis UK London and South East Cyclo Cross League took place at East Brighton Park on Sunday 24th November 2019.  The event was promoted by Brighton Mitre CC and incorporated the third of the four round of the Sussex Cyclo Cross League.  Mercifully no rain fell during the day's racing, but heavy precipitation in days before left the grass and mud banks of this terraced playing field slick and treacherous. 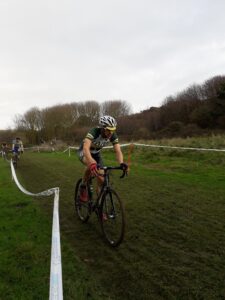 A trio of Lewes Wanderers were on the start line in the race for men in their forties shortly before noon.  Based on past performances Dan Street was well positioned on the grid of 59 starters and a good first lap saw him ride to 20th place.  He was 19th at the end of the fourth circuit, but shortly afterwards developed gear selection issues, most likely from an accumulation of mud, which dropped him to 21st by the flag, one lap down on the winner.

Darren Haynes and Paget Cohen started alongside one another a few rows back from Dan, but that was the last they saw of one another as Darren made a cracking start to be 28th at the end of lap 1.  He slipped a couple of places mid-race, but recovered to a fine 30th place by the finish line.  Paget however was slow off the line and never really got to grips with the course, coming down several times on each lap.  Five places from the rear of the field at the end of the first tour he improved by a couple of spots each time around to eventually place 48th and on the same lap as his club-mates.

Club Chairman Dom Lowden was their only representative in the following race for men over 50 and he too struggled with the conditions.  A very slow opening lap left him 7th of the 10 men over-60, but he gained a place the following time around and a series of more consistent laps granted him 6th position at the completion of five circuits, one lap down on the leaders.

Last to go at around 2:15 was the “elite” race for men in their thirties in which last year’s Sussex League Champion Patrick Hough made his first start of the season and Joe Benians made his cyclo-cross debut.  Without any recent results to earn himself a good grid slot Patrick had to work his way through the field of 45 riders, but he was already up to 7th place by the end of lap 1.  Things started to slip thereafter however as he fell to 9th on lap 2 and a particularly slow (for him) 3rd lap dropped Patrick to 14th.  After that he got back into his rhythm and proceeded to reel off half-a-dozen consistent laps to take 12th place on the day.

Hampered by a lack of off-road experience and perhaps the most-suitable equipment Joe wasn’t able to fully show his talent.  Starting at the back with the fellow newbies he was 39th of 45 racers at the end of the first circuit.  He briefly rose to 38th, but was back in 39th at the end of 7 laps, 3 laps down on the victor.

It probably didn’t help that Joe had raced the afternoon before when again his tyres let him down.  In Round 2 of the Cyclopark “Chill Factor” circuit race series at the tarmac facility near Gravesend he was in a breakaway group on the 10th of 14 laps when a puncture brought his participation to a premature end.