Lewes Wanderer Patrick Hough took advantage of his superb form so far this season in order to qualify and the proximity of the event to take his place among the Elite Men on the start line for the HSBC UK British Cycling National Cyclo Cross Championships at Gravesend Cyclopark on Sunday 13th January.  On what was a grey, but relatively mild winter’s afternoon the race also featured the cream of the under 23 year old men in the discipline amongst them current European Under 23 Champion Tom Pidcock. 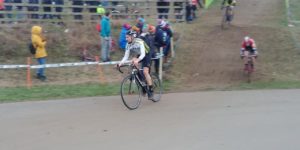 With very little precipitation in the preceding week and a stiff wind blowing the technical course was far from muddy, indeed ran very fast, although there were still plenty of hairpin bends, steep banks, adverse camber slopes, steps, hurdles and even a sandpit to negotiate.  None of which seemed to slow Mr Pidcock who went on to add the British title to his European. With the fastest riders lapping several minutes quicker than the slowest those at the rear were removed from the race when it became obvious they were due to be lapped in order to avoid them getting in the way, but Patrick still completed five of the eleven laps and was classified a fine 37th out of 57 finishers.

Back at Fairwarp Village Hall Lewes Wanderers were in attendance at the annual East Sussex Cycling Association awards lunch where some picked up their trophies in recognition of their time-trialling successes in 2018.  Lisa Davis was awarded the Ladies 10 and 50 Mile Cups for her victories in the ESCA 10 on 21st April and 50 on the 17th June as well as the Lady Best All-Rounder (BAR) for the fastest average speed over 10, 25 and 50 miles in ESCA events.  She, her husband Brett and Peter Baker also collected the Team BAR for the fastest three riders from a single club over the same distances.